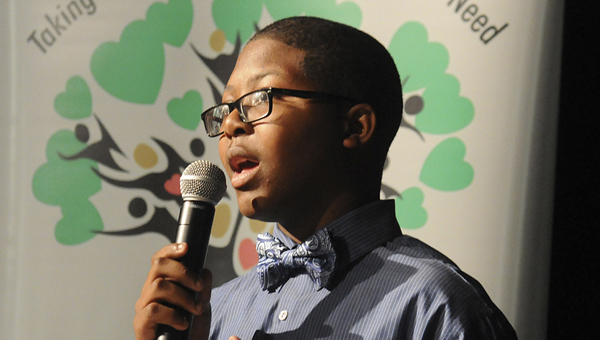 Jalen Powell, a member of Bama Kids, speaks during the Black Belt Believe Catalyst Grant Press Conference. The BBCF awarded a total of $415,000 to 10 organizations dedicated to creating opportunity and health for young men of color in rural communities in the South and Southwest. (Sarah Robinson | Times-Journal)

Smiles and handshakes were shared Friday as the Black Belt Community Foundation spread the wealth to nonprofit organizations determined to make a difference.

“Had we not had organizations on the ground, like each of you, we could not have gotten this grant,” BBCF Felicia Jones said to recipients. “It was important for us to be here to share the work going on, and we wanted the young folks to see that these are the groups they can connect with.”

The big announcement followed various speeches, poems and scripture readings from young men, some of which benefited from the organizations that were represented Friday.

Conducted by Colin Lett, the Selma High School Choir performed during the conference.

Mayor George Evans and Selma High Principal Aubrey Larkin Jr. shared a few words with the audience before BBCF handed out the grants.

The 21st Century Youth leadership earned a $75,000 grant, which it will use to engage 60 black young men in leadership camps to focus on mental, cultural and physical development to maximize their full academic and leadership potential.

The Selma High School of Gentlemen of Excellence, which accepted $10,000, will use its grant money to cater to the well-being of 50 boys through a foster collaborative efforts between teachers, parents, students and community mentors.

Honored with $75,000, the Dallas County Children’s Policy Council will provide alternative educational avenues for about 60 young men of color to keep them focused in their pursuits of educational excellence with hopes of increasing graduation rates and reducing truancy.

“We’re so grateful that you trust us with this money. We will use it wisely,” said District Judge Bob Armstrong, with the Dallas County Children’s Policy Council.

According to BBCF, the recipients collectively serve 1,075 boys.

Robert Wood Johnson Foundation in partnership with Public Interest Projects awarded the foundation with a $415,000 grant, which was shared Friday with local partners working directly with young minority men.

The 10 organizations that earned grants Friday will have to contribute their own matching dollars.