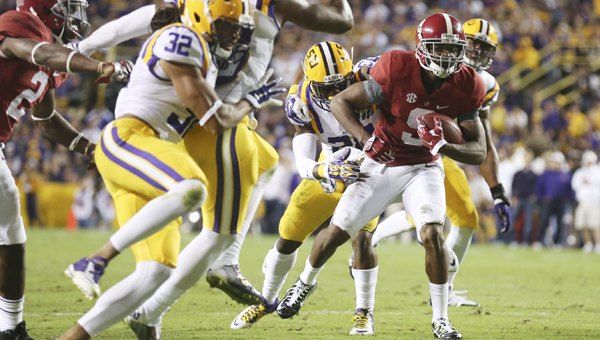 BATON ROUGE, La. (AP) — Alabama quarterback Blake Sims figured out LSU’s defense just in time for the Crimson Tide to deal the Tigers yet another devastating loss in Death Valley.

Sims drove Alabama 55 yards in the final 50 seconds of regulation for a tying field goal, and threw a 6-yard touchdown pass to DeAndrew White in overtime to lift No. 4 Alabama to a 20-13 victory over No. 14 LSU on Saturday night.

With the victory and Auburn’s upset loss to Texas A&M earlier in the day, Alabama (8-1, 5-1 Southeastern Conference, No. 5 CFP) is alone in second place in the SEC West Division with a game against first-place Mississippi State still on its schedule.

Amari Cooper had eight catches for 83 yards and a 23-yard touchdown while setting Alabama career and single-season records for yards receiving, as well as the school’s single-season mark for catches with 79.

But LSU’s defense, which dominated much of night to the delight of a sellout crowd of 102,321, was unable to make one last stand after kickoff specialist Trent Domingue yanked his kick out of bounds, giving Alabama the ball on its 35 with 50 seconds to go.

Sims scrambled for one first down, then hit several clutch passes, none bigger than a 22-yarder to Christion Jones, who made a sprawling catch on the LSU 26. Sims then hit White along the sideline at the 10 to set up the tying kick, a 27-yarder by Adam Griffith — who missed from the same distance, and same right-to-left angle, in the first half.

The comeback was reminiscent of Alabama’s 2012 victory in Tiger Stadium, decided by a late-game drive that ended with Yeldon taking A.J.McCarron’s screen pass in for a winning touchdown in the final minute.

LSU quarterback Anthony Jennings completed just eight of 26 passes for 76 yards, but one was a 14-yard TD to Malachi Dupre. Leonard Fournette rushed for 79 yards for the Tigers, who gained 183 yards on the ground.

Sims finished 20 of 45 for 209 yards and two TDs without an interception.

The Tide and Tigers have engaged in numerous defensive struggles, and with both teams fielding first-year starters at quarterback, this was bound to be another.

LSU stuck with its strength — its power running game —despite the fact that Alabama came in allowing only 78 yards on the ground per game.

The Tigers could afford such tactics with their defense shutting down the Tide on its first three possessions, and LSU took the first lead of the game, ironically, on one of only two passes Jennings completed the whole first half — a fade to Dupre along the left side of the end zone.

Alabama was moving the ball, but saw a 17-play drive go for naught when Griffith’s field goal try from the right hash smacked off the left post in the second quarter.

LSU was unable to move the ball on its next series, however, and Alabama capitalized on good field position when Sims hit Cooper over the middle for his 23-yard score. The score was still tied in the final 2 minutes of the first half when Jennings’ pass was intercepted by Eddie Jackson as receiver Travin Dural slipped on his route.

The turnover gave Alabama the ball on the LSU 29 and led to Griffith’s 39-yard field goal to make it 10-7 at halftime.

LSU tied it at 10 on Delahoussaye’s 35-yard field goal in the third quarter.

Concordia College Alabama’s soccer team saw its season come to an end Friday in the semifinals of the United States... read more