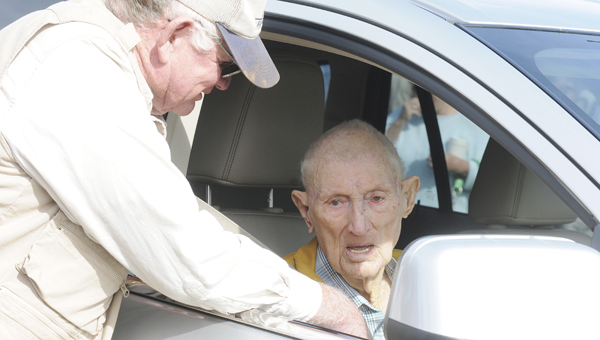 Sam Givhan, left, speaks with his longtime friend Robert Kirk, during Saturday’s West Dallas Antique Tractor, Car, Gas Engine and Craft Show. Kirk was presented with a plaque for the 69 years of service he dedicated to Orrville as the owner of R.W. Kirk & Son Inc.–Sarah Robinson

Orrville took a moment to recognize a man who dedicated most of his life to serving the town Saturday at the West Dallas Antique Tractor, Car, Gas Engine and Craft Show.

Robert Kirk was honored with a plaque during the tractor show for the 69 years he spent serving Orrville as the owner of RW Kirk & Son Inc.

Kirk recently retired at the age of 95. The business, which sold agricultural equipment, has closed.

Ray Kirk, Robert’s youngest son, accepted the plaque on behalf of his father.

Ray worked for his father from age 13 to 25, spending plenty of summers and holidays at the shop. Throughout the years, he watched his father lead the company with respect and dedication that made Robert stand out as a businessman.

“I think anybody that I ever worked with and any of my customers over the years can tell you that I was a nice person. I learned that from Daddy,” Ray said. “I have learned to work hard and to treat people like you wanted to be treated.”

Robert said he wasn’t sure what got his father interested in his profession, but he loved every bit of it.

“He told me one time that when he closed down Saturday at noon, he was always looking forward to Monday morning,” Ray said.

Farmer Sam Givhan was one of many to approach Robert and share a few words with him following the presentation.

As someone who has been a friend to Robert and conducted business with him for more than 50 years, Givhan appreciates all Robert gave to the community.

“I hate to see that business close,” Givhan said. “It’s been a real asset to this community and to the local farmers here. We’re really going to miss it.”

Parts of the movie “Selma” were shot in the city back in June. An official trailer for the film has... read more