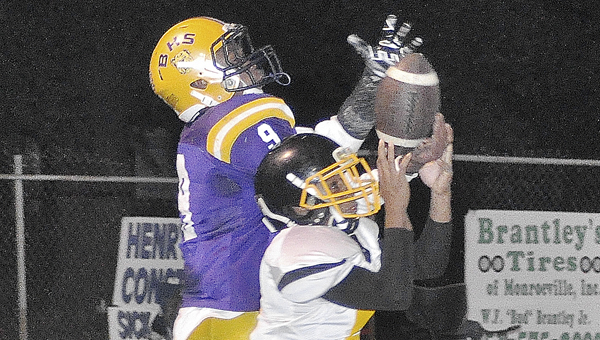 An Ellwood Christian defender breaks up a pass intended for J.U. Blacksher’s Travouris Hill in the fourth quarter. of Friday’s night game. The Eagles won the game 52-35 for the school’s first playoff win. Ellwood will host Billingsley next week in the second round of the 1A playoffs.–Mike Qualls | The Monroe Journal

URIAH — Aided by defensive and special teams scores, Ellwood Christian piled up 52 points in a dominant victory at J.U. Blacksher Friday night to earn the school’s first ever playoff win.

After leading by double digits most of the way, the Eagles (5-6) survived a late Blacksher (6-5) rally and held on for a 52-35 win. The victory helped Ellwood make a little more history, as the school will host its first ever football playoff game next week at Memorial Stadium against Billinglsey (8-2).

“It’s a great win for the program, for the school, for the players, coaching staff,” Ellwood Christian head coach Eric Martinear said. “It was big time to come on the road and win a football game like that.”

After an opening touchdown by Blacksher to begin the game, Ellwood took command and didn’t look back.

The Eagles were in control seemingly the entire way, including 30-13 at halftime. Blacksher mounted a late rally to pull within 44-35 with just over nine minutes to play in the game, but would not score again.

“They got within nine and then we made plays on defense,” Martinear said.

Michael Lewis, who started at quarterback for the Eagles, intercepted a pass and ran it back 85 yards for a touchdown with around four minutes left to play to officially send Ellwood to a destination the school has never reached before — the second round of the AHSAA playoffs.

Two weeks ago the Eagles had to defeat A.L. Johnson just to assure themselves of a playoff spot. Following Friday’s win, Ellwood is four wins away from the school’s first state football championship.

“When we watched film on these guys, I felt like we had a chance if we just played together and played hard,” Martinear said. The guys literally all week bought in like no other week.”

Jalen Furlow, who usually starts at quarterback for the Eagles, relinquished that role to Lewis Friday as part of Martinear’s game plan.

Furlow instead lined up all over the field, including a few times at quarterback, so that the Eagles could get him the ball in space. The plan worked, as Furlow caught and rushed for a touchdown.

“We wanted to put the ball in Furlow’s hands and put him on speed sweeps and stuff like that,” Martinear said. “We wanted to let him match up at receiver. We felt like we could win on the outside with our receivers tonight.”

The Eagles’ special teams also chipped in, as Rayford Mitchell returned the second half kickoff back for a touchdown to extend Ellwood’s lead to 38-13.

For J.U. Blacksher, the loss meant the end of a season that started with a ton of upside. The Bulldogs won their first five games, but lost five of their last six to end the season.

Ellwood is moving the other direction. The Eagles have now won two of three, with the one loss coming to 6A Selma in a game that close through most of the third quarter.

Martinear, who is a first year head coach, and the Eagles will face a tough Billinglsey team next Friday. The Bears only two losses this year came to undefeated powerhouses — 1A’s No. 2 ranked Maplesville and 3A’s No. 4 ranked Gordo.

Billingsley defeated Kinston 42-14 Friday to advance to round two.

“I can’t recall when the last time that a Selma team actually hosted a home playoff game,” Martinear said. “For us to do that with a first year coaching staff, it just shows the resilience of the coaching staff and the players that we have.”

Martinear said the players have bought into the correct mindset and believe the Eagles can make a deep playoff run.

“When I took this job, from day one I raised the expectations at the school, the program and the kids,” Martinear said. “We set out to compete for a state championship. If we [got in the playoffs], all we had to do is do what we are supposed to do and tonight we did that.”