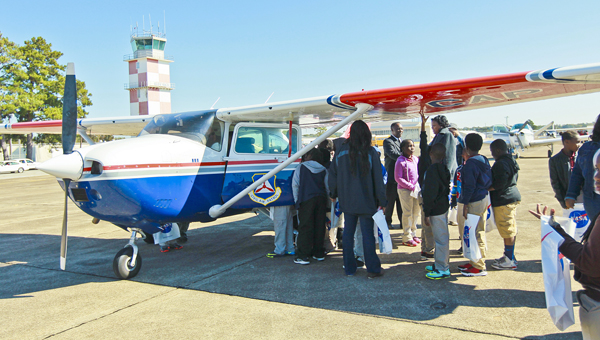 Students get a first-hand look at an airplane Friday during the third annual Aviation Day, which was hosted by Wallace Community College Selma.

Eyes were toward the sky Friday as students from all over Dallas County had the opportunity to watch planes fly over the third annual Aviation Day hosted by Wallace Community College Selma.

Including Wallace, nine area schools attended the event at Craig Field, giving students a chance to learn about aviation and see what it takes to be a pilot.

“The kids get exposed to aviation and learn what aviation is all about beyond the point of just airplanes or flying,” said Eldrick Collins, a fourth grade teacher at Bruce K. Craig Elementary School. “Aviation goes way beyond just flying.”

The students were able to watch airplanes and helicopters fly over, have a meet-and-greet with pilots, test their skills with a flight simulator and even get an up-close look at airplanes. 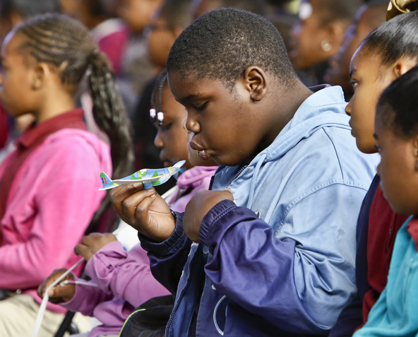 “I think the kids had the most fun going out and exploring and watching and looking from the inside of the airplanes,” Collins said.

Desmond McWilliams, a senior at Selma High School, spoke to those in attendance about his experience with flying and why he is so excited to be going into the field after graduation.

“I got into aviation mainly because it’s something different,” McWilliams said. “I wanted to actually set an example for my peers and for my family, that there is more to life than just sitting and hanging around.”

McWilliams said he is doing everything he can to get where he wants to be in life and that definitely involves being a pilot.

“What I’m trying to do in my life today is go after what I want and make sure that I’m happy during the process,” McWilliams said. “Nothing in life is given to you. You have to go after what you want, and then strive at it as much as you can.”

McWilliams said he knew that he wanted to be a pilot the first time he flew in a plane.

“I just love it,” McWilliams said. “I can’t think of myself doing anything else.”

James Locke, a Civil Air Patrol pilot, understands the feeling and has been a pilot himself for 32 years.

“This is a nice opportunity for these kids,” Locke said.

“When we were in school, we never had anything like this.”

Locke said he enjoyed the event and had fun talking to the students and hearing the questions they had.

“My favorite part is just the opportunity for the kids,” Locke said. “[The kids have been] really enthusiastic and active, loaded with questions. There have been some pretty good questions.”

Locke said he is looking forward to more programs like Aviation Day, and hopes to continue to see this one grow.

“We certainly want to come back and share what we do,” Locke said.