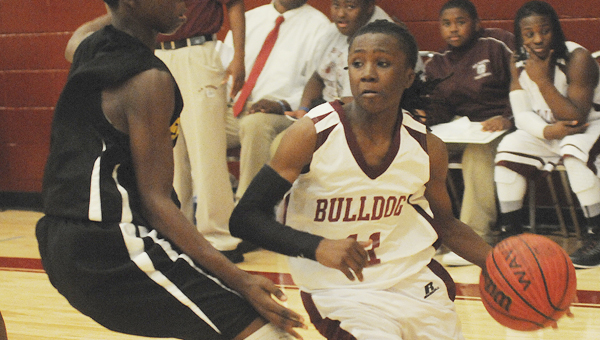 Ellwood’s Orseen Witherspoon banked in a long three-pointer with under two minutes to play to pull the Eagles (0-1) within 32-29, but R.B. Hudson (1-1) scored nine of the game’s final eleven points to pick up its first win of the year.

“We got challenged really well but I think our size trumped the challenge,” R.B. Hudson head coach Derrick Randolph said.

Terrion Posey led the way for the Bulldogs, scoring 10 points, including two buckets in the final minutes to held R.B. Hudson get some breathing room. Posey had plenty of energy and seemed to get his hand on nearly every other rebound.

Ellwood was within a shot or two the entire game, but the Eagles were unable to grab the lead in the second half.

“We couldn’t break through,” Ellwood Christian head coach Derrick Edwards said. “I think a lot of it is we only had a couple of days of practice coming from football and they are working on our gym so we aren’t gelling right now, but we will be alright.”

The Eagles were the team that came out on fire, taking an early 12-5 lead behind a three-pointer and two free throws from Witherspoon. R.B. Hudson closed the quarter on a 10-0 run to take the lead, and did not trail the rest of the way.

Until the final minute, the largest Bulldogs’ lead of the game was five points.

“We put a little pressure on them trying to get turnovers so we could try to make easy transitional shots,” Randolph said.

The pressure was tough for the Eagles to handle and in the final two minutes it finally broke through. Ellwood needed quick baskets and the Bulldogs’ press forced turnover after turnover to pad the lead.

“The difference in the game was free throws,” Edwards said. “We have to make those.”

R.B. Hudson’s seventh grade team jumped out to an early lead against Ellwood Christian and held on for a 35-18 win Thursday night.

“We got a lot of fastbreak points early,” R.B. Hudson head coach Cleophus Flanagan Brown said. “We got a lot of easy buckets and we didn’t really have to work hard for those buckets. We won the 50/50 balls. We outhustled them a little bit early and then we coasted at the end.”

The Bulldogs (2-0) led 11-3 after Torquemyran Bradley banked in a three-pointer at the end of the first quarter. R.B. Hudson extended its lead to 20-9 at halftime and 28-13 after three quarters. The Eagles attempted to make a run at the end, but never got the lead under 14 points.

“We only have one kid who is on the B-team who has actually played basketball,” Ellwood coach Calvin Marshall said. “That makes a difference.”

Ellwood Christian runs onto the field for the Eagles’ first game this season against Francis Marion, led by head coach... read more