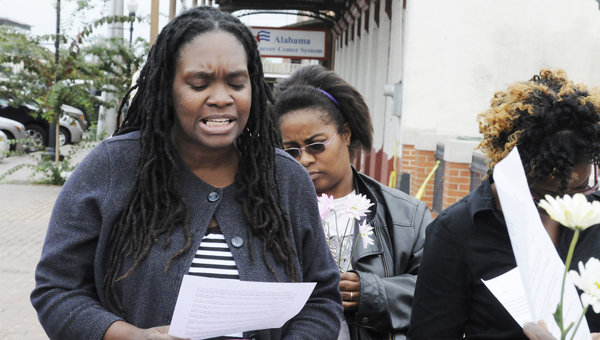 Malika Fortier, volunteer for the Ancient Africa Enslavement and Civil War Museum, speaks at the museum’s Maafa Ceremony held Wednesday near and on the Edmund Pettus Bridge.

The Ancient Africa Enslavement and Civil War Museum and its supporters marched along the Edmund Pettus Bridge Wednesday to commemorate the Black Holocaust.

Also referred to as Maafa, the Black Holocaust represents an era when millions of Africans lost their lives through murder, disease, suicide and more to escape slavery, according to the museum.

In 1865, Congress passed and ratified the 13th amendment, which abolished slavery in the United States.

Since the 150th anniversary is next year, Sanders felt it was appropriate to hold the Maffa Ceremony Wednesday to help bring it to people’s attention.

During the event, the group recited words that reminded people of the past and empowered them to seek a better tomorrow.

Afterwards the group walked along the Edmund Pettus Bridge, where they released flowers into the wind and Alabama River while reflecting on the Middle Passage.

The infamous passage is one in which ships carried hundreds of slaves across the Atlantic from Africa to Americas as part of the slave trade.

Shipped under foul conditions, several of the slaves died and had their bodies tossed overboard, according to the History Channel’s website.

Selma resident Columbus Mitchell said seeing the struggles Selma is going through, such as high poverty and crime rate, pushed him to join the Maafa Ceremony.

The afternoon event was followed by a three-hour workshop at Wallace Community College Selma where author Tony Browder informed the public about the contributions African people throughout the world made prior to the Black Holocaust.

Browder wrote the book “The Nile Valley’s Contributions to Civilization.”