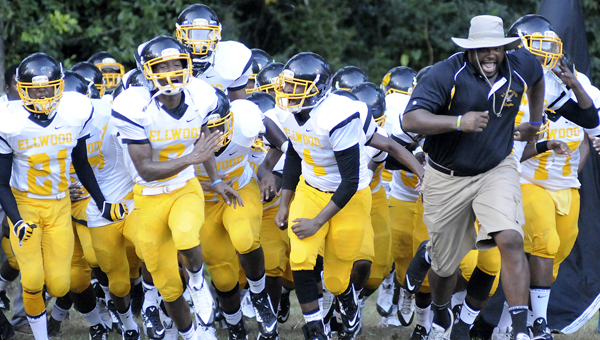 Ellwood Christian runs onto the field for the Eagles’ first game this season against Francis Marion, led by head coach Eric Martinear. The Eagles will travel to Uriah Friday night to take on J.U. Blacksher in the first round of the AHSAA football playoffs. –File Photo

Ellwood Christian begins what the Eagles’ hope is a deep playoff run Friday night at J.U. Blacksher, in a matchup of teams that do not have a recent history of qualifying for the postseason.

In only their third year in the Alabama High School Athletic Association, Ellwood (4-6) is back in the playoffs for the second time. In 2012, Ellwood lost to Notasula 38-6 in the school’s only previous playoff game. An Eagles’ win Friday would be the first playoff win in school history.

It’s been over a decade since an AHSAA school in Dallas County won a playoff game. The last team to do it was Southside in 2003, but the Eagles can change that Friday.

“It would be real big for the program, for the community, for these seniors and for my coaches after all the time that has been put into this season,” Martinear said.

Blacksher (6-4) is a team that resembles Ellwood in many ways, Martinear said. The Bulldogs have plenty of playmakers that love to get into space and make plays, something the Eagles have excelled at in their spread offense.

“They run the spread pretty much like us and they like to put the ball in their playmakers hands,” Martinear said. “They have a few guys that kind of scare us, so we are going to try to keep a hold on them. We just want a good football game and we want to represent the school well.”

The game will mark Blacksher’s first playoff appearance since 2008 and if the nerves don’t get in the way, it could be a shootout. Blacksher averages 33.3 points per game, while Ellwood averages 24.3. The Eagles have scored over 30 points in every win this season.

“We’ve got to execute all the plays, play hard on defense, have much intensity, complete passes and get first downs and we can win,” Ellwood Christian quarterback Jalen Furlow said.

Cold temperatures could play a role as well, something Jalen Furlow is preparing for. Forecasts call for a low in the high 30’s Friday, meaning the temperature will likely be chilly around game time.

“It’s going to be cold,” Furlow said. “You’ve got to go ahead and get used to the cold weather and you’ve got to play hard. The other team is going to fight, because they want the same [championship] ring you want.”

Both teams come into the playoffs trying to shake recent losses. After a 3-1 start, Ellwood has lost five of its last six games to end the season. Blacksher has lost its final three games of the season and four of its last five.

Kickoff is scheduled for 7 p.m. at J.U. Blacksher High School in Uriah.

Concordia head coach Stanley Conner talks to his team during a practice earlier this season. Conner is back coaching the... read more