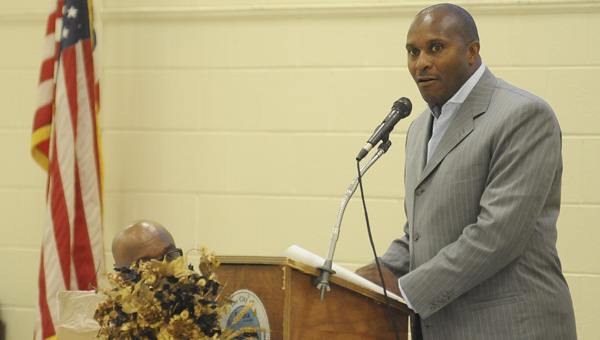 Alabama State head football coach Reggie Barlow, a Montgomery native, was the speaker. Barlow, who once caught passes as a star receiver for the Hornets, is now leading an Alabama State program that has tied for first in the Southwestern Athletic Conference’s eastern division three times in his tenure.

This year the Hornets are 4-5 on the season and have lost four consecutive games going into Saturday’s game against Jackson State.

Barlow’s story is one his players should be able to relate to. He was actually offered a football scholarship for his play on the baseball field, but once he got to Alabama State he showed his talent on the gridiron. Barlow finished his collegiate career with 133 catches and 2,536 yards and was selected in the 1996 NFL Draft by the Jacksonville Jaguars.

“It was a tough transition [to the NFL],” Barlow said. “It’s not that Alabama State guys can’t play on that level. The SEC is a much faster league and just moving up and playing from college to the NFL, especially from a 1AA level, it was pretty difficult for me.”

He led the NFL in punt return yardage in 1998 before moving on to the Oakland Raiders. After a short stint in Oakland, Barlow joined the Tampa Bay Buccaneers, where he would win a NFL championship in Super Bowl XXXVII. During his NFL career, he played for coach Jon Gruden and played alongside superstars like Jerry Rice and Tim Brown.

“It was a great time and a great experience,” Barlow said. “I won a Super Bowl ring and met a lot great people but the best times of my life were really at Alabama State.”

After retiring from the NFL, Barlow returned home and found an opportunity to coach at Alabama State, which really allowed his career in football to come full circle.

He served as the college’s quarterbacks coach in 2005 but was promoted to head coach in 2007. He has led the Hornets to a 46-42 record during his time at the school.

Barlow has helped many players reach the professional level in his time with the Hornets.

Among the Hornets’ greats he coached are Tarvaris Jackson, Isaiah Crowell and Greg Jenkins.

He spoke Monday night about what it is like recruiting in a state that includes gridiron behemoths Alabama and Auburn.

“We recruit every guy because you never know when there is a really good guy at one of the high schools that is going to Alabama, Florida, or Georgia, but things may not work out,” Barlow said.

Barlow said that the school does recruit players in Selma, including former Saints’ standout Davian Brantley, who signed with ASU last year.

The quarterback club will not meet the next two weeks, but will welcome Troy assistant head football coach Shayne Wasden on Nov. 24.  The club’s only other meeting this year will be Dec. 8 when Auburn basketball coach Bruce Pearl will speak.