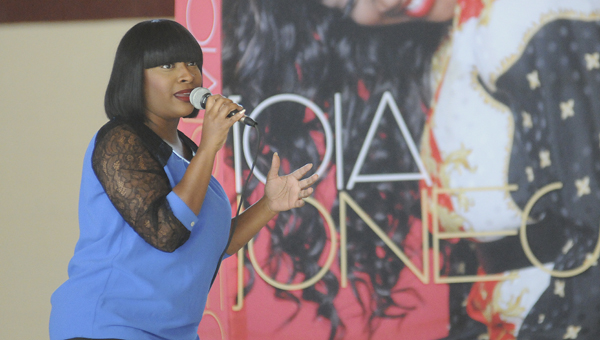 “The Voice” contestant Toia Jones sings Whitney Houston’s “I Will Always Love You” during a visit to R.B. Hudson Middle School on Friday.

In the last few months, Toia Jones’ dream of becoming a nationally renowned singer became true as she advanced to the final episodes of NBC’s “The Voice.”

She stopped by R.B. Hudson Middle School on Friday to share a message close to her heart to students: not to give up on one’s dreams.

“You all have the opportunity and the possibilities are limitless,” Jones said. “You guys can do anything you set your mind to, and I am a true witness to that.”

Jones tried out for “American Idol” four times, but never made it through the early auditions.

“If that had stopped me, I would not be where I am today,” Jones said.

Jones, who is from Montgomery, made it from 50,000 people down to the final 20, before she was eliminated from “The Voice” Monday when coach Adam Levine picked Damien Lawson as the winner of a sing off.

Undeterred, she did her part Friday to motivate Bulldogs’ students to push for their goals and aspirations no matter what the obstacles in their path might be.

“I feel so grateful before I am here talking to you today, because you all are the future,” Jones said. “I see so much potential just in this room.”

Jones opened her speech up to questions and, as expected, was asked to sing.

She sang “I Will Always Love you” by Whitney Houston and showed off some of the vocal talents that helped her perform so well on the “The Voice.”

“Never let people tell you that you can’t do something, because you can absolutely do whatever you put your mind to,” Jones said.

Selma Mayor George Evans and Selma City Schools acting superintendent of Education Larry Dichiara were also in attendance at Friday’s motivational rally. They closed out the rally by thanking Jones for making a stop in Selma.

“One of the things when we see people from Alabama on these shows, is we are so proud of them,” Dichiara said. “They are just like us.”

At the end of the rally, Jones took photos with students and school administrators.

“We are going to be your biggest fans,” Dichiara said. “Thank you.”