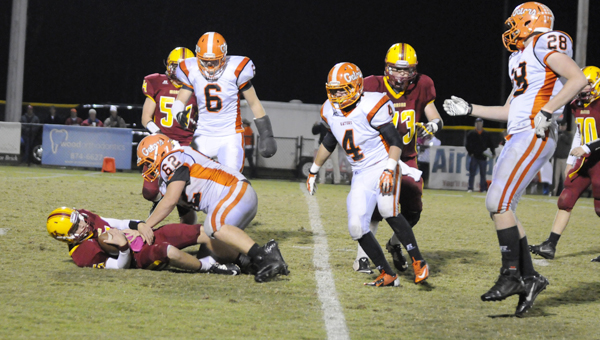 Clarke Prep won a low scoring game over Morgan Academy Friday night 14-0 in the last game of the Senators’ season.

In a game dominated by defense and poor offense, the Gators were just a little better. Morgan Academy had its opportunities to get on the scoreboard, but the Senators couldn’t take advantage.

“We dropped a handful a passes that really would have made a big difference in the game, and our quarterback was under pressure a lot,” Senators head coach Jake Wingo said. “We had a couple of breaks on defense where they scored, but overall the effort was great as a team. I was proud of them. They left it out there on the field.”

Morgan Academy was looking for its second consecutive win to end the season after defeating Hooper Academy 24-21 in overtime.

Instead, the Senators (1-9) finish the year with a tight loss to a team heading to the postseason.

“Our defensive did well, but the offensive line struggled tonight,” Clarke Prep head coach Billy Hamilton said. “Of course Morgan probably had a lot to do with that. Their defense line was very good on us, and that had a lot to do what how we played.”

The first score of the night came with 8:35 left in the second quarter, when Gators quarterback Tristan Sims ran the ball into the end zone from the Morgan’s 1-yard line.

Clarke Prep running back Zach Gregson brought the score to 14-0 when he caught a 30-yard pass.

Morgan had some shining moments as Morgan guard John Tyler Fisher recovered a Gators’ fumble inside the five-yard line.

Wingo’s first season ended with just one win, but he can see the program moving in the right direction.

“Obviously we would like to win more games, but our program is headed in the right direction,” he said. “There is no doubt about it. We have improved as a football team.”