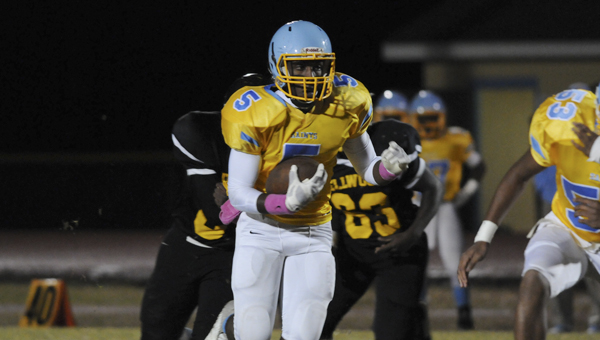 Selma running back Brandon Hatcher runs for a big gain in Friday night’s victory over Ellwood Christian. Hatcher ran for two touchdowns in the Saints’ 38-12 victory over their county rivals. The Eagles will play J.U. Blacksher next week, while Selmas season came to an end.–Daniel Evans

In the spirit of Halloween, Ellwood Christian gave Selma quite a scare for the first half of Friday’s game at Memorial Stadium, but the Saints depth and athleticism proved to be too much to overcome.

Brandon Hatcher ran for two touchdowns to lead Selma to a 38-12 victory over their county rivals, extending the Saints’ dominance in the series that started in 2012 when Ellwood moved to the Alabama High School Athletic Association.

“The seniors just wanted to come out and end it up with a win,” Selma head coach Leroy Miles said. “I’m happy for them. This is a great group of seniors.”

Selma broke a second quarter 12-12 tie with an 11-yard touchdown run by Carl Robbins. On the Saints’ next possession, Hatcher added his first score of the night on a 4-yard run with 1:06 left before halftime to give Selma some breathing room.

In the second half, the Saints’, a 6A program deep at many positions, started to have their way up front with the 1A Eagles.

“We were banged up so we were really trying to save our guys for the playoffs,” Ellwood Christian head coach Eric Martinear said. “We competed. That’s all I ask for is just to compete. We were in the game and we had a chance.”

The Eagles only seriously threatened one time in the second half. Ellwood punted to a Selma returner, who muffed the punt. The Eagles’ recovered and ran it back for a score, but officials correctly ruled the play down at the spot of the recovery.

“That was a momentum play for us,” Martinear said. “We thought he could advance it, but it is what it is.”

The Eagles still moved the ball inside the 20-yard line before an interception thrown by Michael Lewis ended Ellwood’s drive. Selma piled on two more scores in the second half as Hatcher scored on a 3-yard run with 10:12 left in the fourth quarter. Later in the quarter, Selma quarterback Marquell Moorer found Lekedrich Rogers for a 27-yard touchdown pass to make the score 38-12.

“We have got numbers against them. We have more kids than them and it is really to our advantage,” Miles said. “They have a good team, and they played hard the first half. In the second half with those numbers, we wore them down and we were able to be successful.”

With many of the players off of each team knowing one another, the game got heated in the first half.  Selma’s Rashawn Reeves was ejected and there were several skirmishes between the two sides.

“I’m not going to say it’s a rivalry because we have never won, but we can start a rivalry. That’s the way our team is built,” Martinear said. “We want to be physical and we want to be nasty. That’s how we coach.”

Moorer answered with a 30-yard touchdown pass to Cyron Ellis to give Selma a 12-6 lead. Mitchell tied it with an 8-yard run with 6:28 left in the first half, but the Saints took control with Robbins and Hatcher’s touchdowns before the break.

Despite the loss, the Eagles are the team that will be competing in the playoffs next week. Ellwood Christian will travel to J.U. Blacksher next week in the class 1A playoffs. Martinear said there’s a lot of positives the Eagles can take into next week’s game.

“We can fight against someone that is bigger than us,” Martinear said. “We stood up toe to toe with them. That’s all you can ask for as a coach.”