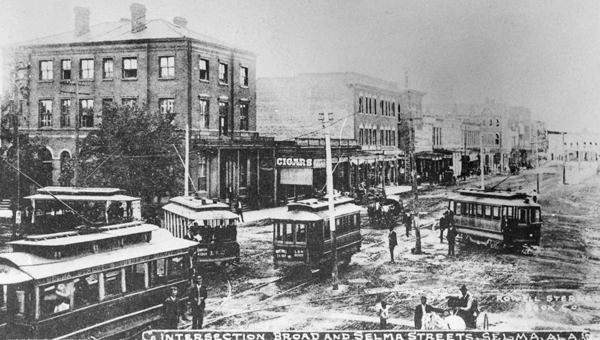 This photo from “Images of America: Selma” shows railcars along Broad Street and Selma Avenue.

Selma has a rich history, full of happy and heartbreaking moments that made the Queen City what she is today.

When Sharon Jackson, author of Images of America: Selma, and her husband decided to relocate, they chose Selma because of the city’s past.

“My husband and I were attracted [to Selma] because of its unique history,” Jackson said.

Jackson, being a historian, decided that she wanted to complete a book about Selma, and what drew her here in the first place.

“The driving factor for me was we had lots of people come visit us in Selma, and it just didn’t feel like there was a book that was beautiful, with beautiful pictures, but also kind of told the overall story of Selma and some of it’s interesting people,” Jackson said.

Upon arriving in Selma, Jackson met the late Jean Martin and the two quickly became friends.

The two women had discussed collecting photographs of Selma and writing a book together, but Martin passed away before they had the chance.

With the help of many members of the community, Jackson was eventually able to accomplish her goal of completing the book.

“One of my main objectives is that the book would show the total picture of Selma. We’re not just the Voting Rights Movement; we’re not just the Civil War. It’s a city of some great families and people,” Jackson said. “I was really striving to have a balanced representation of Selma.”

Throughout the process of gathering information for the book, Jackson said she had the opportunity to dig deep into Selma’s past and learn a lot along the way.

“I think that Selma really is one of the most interesting cities in America,” Jackson said. “I hope that the book will allow all of us Selmians to take more pride in our city’s history and be willing to talk about our history.”

The book offers a combination of different photographs and writings dedicated to different events and families through the years.

“For such a small town, located in the center of Alabama, to have had such a crucial role in some of these significant periods in American history, was captivating to me.

“I learned so much about Selma. I knew Selma was unique. I knew that Selma had played some significant roles in just the development of the country over all.”

Jackson said she is thankful for the help that she received from different contributors, and especially the use of the photographs by Billy Rosenburg.

Photo was reprinted with permission from Images of America: Selma, by Sharon Jackson.

Available from the publisher online at www.arcadiapublishing.com or by calling 888-313-2665.

“The Voice” contestant Toia Jones sings Whitney Houston’s “I Will Always Love You” during a visit to R.B. Hudson Middle... read more