Selma Police are searching for a 27-year-old man who allegedly shot his 51-year-old uncle. 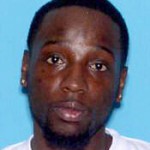 Officials responded to the 3000 block of Annie Cooper Avenue on Wednesday at 1:50 p.m. in reference to a reported gunshot victim.

When officers arrived on the scene, they met with a 51- year-old black male who had a gunshot wound in the left leg and identified his nephew, Chadwick Jermaine Blake, as the shooter, according to Lt. Curtis Muhannad with the Selma Police Department.

The victim told officers Blake shot him over a verbal altercation, punched him in the face and held the gun to his head.

The victim received first-aid from Care Ambulance, but refused to be transported to the ER for further treatment, according to Selma PD.

A warrant has been issued for the arrest of Blake for first-degree assault.

Information that leads to the arrest of Chadwick may be rewarded up to $1,000 dollars, according to Muhannad.