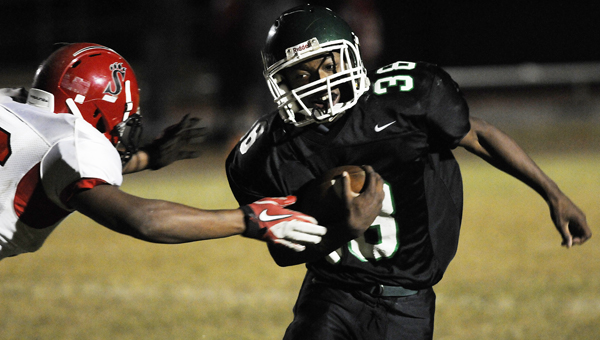 Dallas County running back Calvin Starks Jr. breaks the tackle of a Southside defender in Thursday night’s game at Memorial Stadium. The Hornets won the game 43-30 and Starks. Jr. scored two touchdowns in the win.–Daniel Evans

In a game with no punts and ten offensive touchdowns, it was only fitting that two defensive stops ended up being the difference.

After Calvin Starks Jr.’s 8-yard run put Dallas County up in the fourth quarter, the Hornets defense swarmed a Southside offense that had moved the ball up and down the field with ease most of the night.

Timderious Rubin and Cody Bohannon combined for a sack of Panthers’ quarterback Khamari Gibbs to derail one possession and Anthony Oliver intercepted a pass to preserve a 43-30 Dallas County win.

“I’m very proud of the defense,” Dallas County head coach Marty Smith said. “When they had their backs against the wall and we needed a stop, they found a way to get it done.”

The win gave Dallas County (3-7) its first three-win season since 2010, and it also provided Smith’s team some momentum going into his first full offseason at the school.

“I hate the season is ending right now because things are finally coming together,” Smith said. “I’m proud of the way they kept fighting and playing hard. They believed good things were going to happen.”

Plenty of good did happen on offense as the Hornets totaled 350 total yards. When Southside (3-7) needed a stop the most, the Panthers couldn’t get it done.

“That’s been a problem all season,” Southside head coach Daniel Flowers said. “Missed tackles, not pursuing to the ball — that’s the kind of stuff we have to coach better. It’s not all of a sudden happening right now. This has been happening all season.”

Xavier Knight scored twice in the early going to give Dallas County a 13-0 lead after the first quarter. Southside answered with a Gibbs’ touchdown run with 7:51 left in the second quarter, but it was only the first of four touchdowns between the teams before halftime.

Starks Jr. broke several tackles, spun around and ran for a 60-yard touchdown with 6:00 left to play in the second quarter. Gibbs answered back with a 25-yard touchdown to DeQuan Johnson to bring the Panthers with 21-16 with 1:20 left in the half.

The Hornets reclaimed command of the game with a 41-yard drive in the final 1:06 of the first half. Jermere Jackson capped the drive with an 11-yard touchdown with 17.6 seconds left before the break, giving Dallas County a 29-16 halftime advantage.

Southside quickly regained its footing in the second half. Gibbs led the Panthers on a 66-yard touchdown march and capped it by calling his own number for a 20-yard score to bring Southside within 29-22. After the Panthers got their only defensive stop of the night by intercepting Knight’s pass in the end zone, Gibbs and the Southside offense went back to work. The Southside signal caller threw a 15-yard touchdown to Scott Cole to make it 29-28 and Michael Walker’s two-point conversion run put the Panthers up 30-29.

Dallas County dominated the game from that point on. A 30-yard run by Knight set the Hornets up in Panthers’ territory.

Just a few plays later, Starks Jr. ran for an 8-yard score around left end to make it 35-30 Dallas County with 9:56 remaining in the game.

After a defensive stop, Knight put it away with his third touchdown of the night wth just over four minutes left to play. Lane Wallace threw a two-point conversion to Paul Daniels to complete the scoring.

“We got worn down,” Flowers said. “…Our guys were tired. They were going both ways. That’s what you run into when you have guys playing both ways.”

Ellwood Christian quarterback Jalen Furlow tries to break a tackle against Akron earlier this season. Furlow and the Eagles will... read more