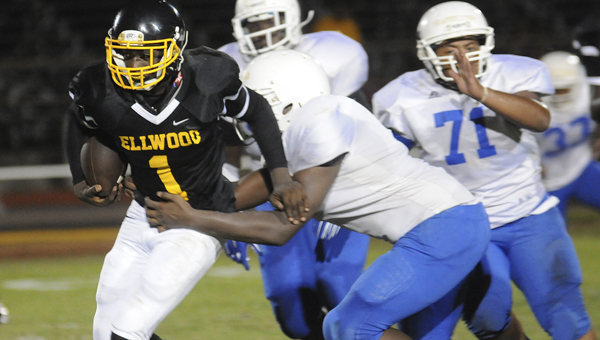 Ellwood Christian quarterback Jalen Furlow tries to break a tackle against Akron earlier this season. Furlow and the Eagles will take part in the Class 1A playoffs next week, but first they will take on county rival Selma at Memorial Stadium on homecoming. –File Photo

Ellwood Christian has already accomplished its main goal this season: making the playoffs. The Eagles cemented that with an upset road win over A.L. Johnson last week, and Friday they get a chance to stake their claim as Dallas County’s best team.

The Eagles close the regular season Friday against county giant Selma, a team the Eagles have never defeated in two previous tries.

Last year’s game, a 54-14 shellacking, was never close, but this year there is renewed hope. After all, it’s the Eagles, not the Saints, that are postseason bound.

If Ellwood hopes to beat the Saints, the Eagles will have to find a way to slow down Selma’s running game and prevent easy scores. Last year, Selma ran for 275 yards against Ellwood and recorded two safeties.

Of course, last year’s game was a battle of teams going different directions. With the win, Selma had won its fourth in a row, while Ellwood lost its final seven games by double digits.

This season it’s Selma coming off of back-to-back losses to Bessemer City and Northridge and Ellwood preparing for a playoff game with J.U. Blacksher. For the first time in two calendar years, Selma will take the field without a chance of making the postseason.

“Some seniors realize this is the last game of their career and they won’t play another game of football, so I think our kids are going to come out and play hard and give it their best shot,” Miles said.

The Saints will have to slow down Ellwood’s Jalen Furlow, who had success running in the Eagles only other county game this year against Keith.

“Their quarterback is a real good athlete and can make plays with his feet,” Miles said. “We have to contain him.”

As if the Eagles aren’t motivated enough, Friday is also homecoming for Ellwood. Coming off one of the biggest wins in school history, Miles expects the Eagles to be fired up for their homecoming.

“They have been waiting on this game all season,” Miles said. “There’s been talk since the first week of the season about Ellwood and Selma High.  I told my kids we were going to take [the games] one at a time. Now, here we are.”

To be fair, neither Southside or Dallas County produced the seasons they were hoping for.

The Panthers had playoff aspirations with a core nucleus of players back and a head coach in Daniel Flowers in his third season at the helm. The Hornets started the year with high hopes with new coach Marty Smith and had aspirations of making some noise in a new classification.

Neither one of those things came to fruition, but progress can still be made when the Panthers and Hornets clash Thursday.

Whichever team wins the game Thursday will finish with an improved record over last season. Dallas County (2-7) finished 2-8 last year, but could pick up a third victory against the Panthers. Southside (3-6) could better its record for the third straight season. In 2012, the Panthers went 2-8, followed by a 3-7 record last season. Both of those seasons included a win over Dallas County to end the season. If Southside can do it again Friday, the Panthers will finish with four wins for the first time since 2009.

SERIES HISTORY: The last two meetings, both Southside wins, have been settled by a combined five points.

WHAT TO WATCH FOR: Turnovers have plagued both teams this season at bad times. Whichever team minimizes mistakes Thursday will probably find themselves in good position to win.

Morgan Academy (1-8) won its first game of the season last week in an overtime thriller over Hooper Academy. The Senators will try to keep the momentum rolling Friday against Clarke Prep, who might be looking forward to a playoff game at Lakeside next week.

Last season, Clarke Prep (4-4) defeated the Senators 72-41 in a score that resembled a game played on hardwood and not on the football field. The teams may have a hard time scoring even half of the 113 points they combined for last year. Clarke Prep hasn’t scored more than 52 points in a game all season and Morgan is averaging 11.8 points per game.

SERIES HISTORY: Clarke Prep has outscored Morgan 107-48 in two wins versus the Senators since 2012.

WHAT TO WATCH FOR: Morgan will try to take some momentum into the offseason with a second straight win to close the year.

For the first time since 2007, Keith (2-7) will take the field with no chance of qualifying for the playoffs. Ellwood Christian’s win over A.L. Johnson last week eliminated the Bears.

Friday’s opponents Central Hayneville (2-6) is showing steady improvement in the win column after not winning a football game from 2008-2012.  Hayneville has two victories this season and a win would give the Lions their first three win season since 2006.

WHAT TO WATCH FOR: Hayneville has allowed every team it has played this season to score 19 points or more. Keith has only scored 19 or more twice this season. Both times Keith won the game.