Attempted murder suspect turns self in

Leroy Jackson, who was wanted for attempted murder, turned himself in to the Selma Police on Tuesday.

The 20-year-old suspect is currently in Dallas County Jail under no bond for allegedly shooting a 25 year-old male multiple times near the intersection of Philpot Avenue and Lauderdale Street on Saturday, according to Lt. Curtis Muhannad with Selma PD. 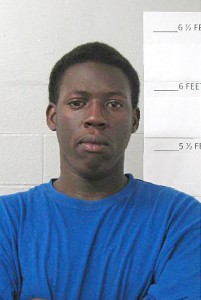 “They were acquaintances, and we believe there may have been some sort of misunderstanding,” Muhannad said. “We are still investigating it.”

Selma Police responded to intersection of Philpot Avenue and Lauderdale Street Saturday at 12:36 a.m. in response to reports that shots were fired in the area.

When officers arrived, they heard cries for help and found the victim lying in a nearby drainage ditch, suffering from several gunshot wounds.

The victim, who was shot in the chest, buttocks and lower abdominal area, named “Leroy” as the shooter. The 25-year-old male was transported Saturday to the Vaughan Regional Medical Center, where he was later air lifted to a hospital in Montgomery in critical condition.

As of Wednesday afternoon, the victim is stable at a Montgomery hospital, according to Muhannad.

The Selma Police Department issued a warrant for Jackson’s arrest Monday, and he turned himself in to its Criminal Investigation Division the following day.

Jackson is set to appear in Dallas County District Judge Bob Armstrong’s courtroom Thursday at 1:30 p.m. for a bond hearing, according to District Attorney Michael Jackson.

Attempted murder is a Class A felony. If convicted, the suspect could face 10 years to life in prison without parole.