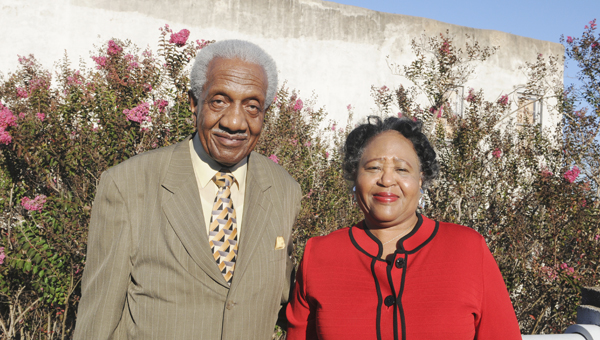 Two Selma residents were inducted into the 2014 Alabama Senior Citizens Hall of Fame on Oct. 12.

Fredrick Douglas Reese Sr. and Joyce O’Neal attended a ceremony in Montgomery, in which they were two of 10 accepted into the 2014 Alabama Senior Citizens Hall.

Created by the Alabama Legislature in 1983, the honor recognizes Alabamians ages 60 and older for their outstanding accomplishments, service and contributions to the lives of older Americans.

“It is pretty nifty that out of the 10, two were from Selma,” said Warner Floyd, chairman of the Senior Citizens Hall of Fame. “And they were both added with a unanimous vote.”

Honorees may be acknowledged for their contributions as an educator, elected official, health professional and more.

Reese was recognized for his positive influence in the church community, Floyd said.

Reese has more than 50 years of in ministry in pastoral leadership with 49 of those years spent as a pastor of Ebenezer Missionary Baptist Church in Selma.

He has mentored to young ministers, provided spiritual guidance to individuals of all ages, conducted hundreds of funerals for church members and made countless visits to seniors in hospitals, nursing homes, assisted living residences and hospice facilities, according to the Senior Citizens Hall of Fame.

Reese has served as an instructor, assistant administrator, and superintendent of the Selma City School System and the first black president of the Selma Education Association, according to the city of Selma.

The Selma native was named the president of the Dallas County Voters League.

He has coordinated several marches and demonstrations meant to bring attention to the injustice of African Americans and signed the invitation for Dr. Martin Luther King Jr. and Southern Christian Leadership Conference to visit Selma and Dallas County and assist in fight for voting rights.

“It all brought back to my mind all of the trials and tribulations that we’ve gone through in order to reach this particular point,” Reese said in response to receiving a spot in the hall of fame. “I give all the credit and praise to the Lord. Nothing I did or could do would be deserving of this.”

O’Neal was chosen for her role in the health community, Floyd said.

O’Neal spent six years running the Alzheimer’s Patient Support Group at Brown Chapel AME Church in Selma and has served as the president for Social Work Society at the University of Alabama.

She was the first African American elected to the State of Alabama Personnel Board and helped oversee the State Employees’ Health Insurance Program.

O’Neal continues to serve the retiree community in various Black Belt areas, including Dallas County, on the Alabama Retired State Employees’ Association Board of Directors as an advocate for adequate state and local government retirement benefits.

“I reared to give back to the community, and that’s what I think I’ve done,” O’Neal said. “To be recognized for it is an awesome experience.”