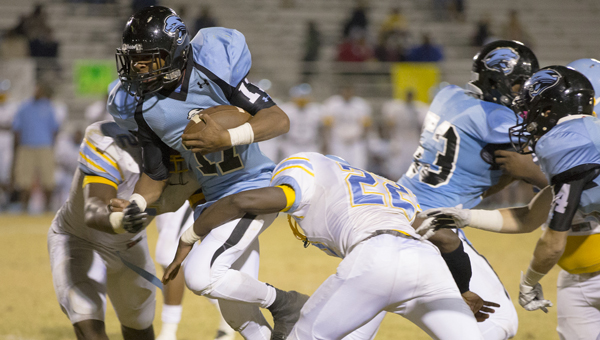 Selma saw its playoff hopes end with a thud Friday night at Northridge, as the Saints were unable to match the Jaguars’ energy in a 32-0 loss.

The game was essentially a play-in game for a postseason berth, as both teams came into the game tied for fourth in region play. After Friday night, it was clear the Jaguars were the team that had earned the right to move on.

“They were that much better than us tonight,” Selma head coach Leroy Miles said. “We just got outplayed. We played hard but I thought they played a little harder.”

For Northridge, it was the hat trick of a victories.The Jaguars won on Homecoming.

They won on Senior Night. And, most importantly, they won to clinch a spot in the Class 6A playoffs.

It was a must-win situation that ended up in the Jaguars’ favor, sending them to the postseason for the first time since 2011.

Northridge’s defense held Selma to just 78 yards at the half, while the offense racked up 225 yards in the first two quarters. Selma just couldn’t get out of its own way.

“We just made a lot of mistakes, Miles said. “Every time we did something good, we negated it with a penalty and it really cost us tonight.”

Northridge was more than happy to take advantage.

Jaguars quarterback Tommy Bryant threw a pair of touchdown passes to Cedric Bradford Jr. and also rushed for a 50-yard touchdown. He finished just shy of 100 yards passing and had 84 yards rushing on nine carries.

Selma will finish its regular season next week against Ellwood Christian.