EMCA pulls away from Meadowview in second half 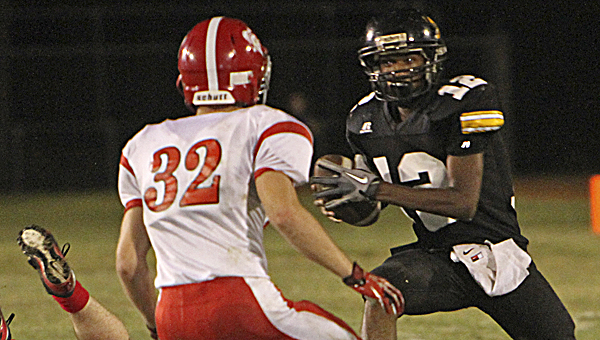 After a first half shootout that saw the teams combine to return three consecutive kickoffs back for touchdowns, East Memorial Christian Academy (4-4) left Meadowview Christian (2-6) in the dust for a 62-26 victory.

The three kickoff returns in a row — two by EMCA — and two first half Trojans’ safeties set the stage for a high-scoring second half on senior night at Wasden Field. EMCA’s offense kept rolling, while Meadowview — hurt by injuries and penalties — just couldn’t keep pace.

“We moved the ball on them great in the first half,” Meadowview head coach Lebo Jones said. “Our game plan was to control the clock and get four or five yards a carry and we did that, but we just turned the ball over too many times. And when we kicked to them, they ran it back almost every time.”

It seemed like any time Malik Pettus touched the ball for EMCA, it was a problem for the Trojans. Pettus ran back two kickoffs for touchdowns and scored six total touchdowns.

“When you have someone as special as that kid back there that is going to be playing at the next level, in whatever sport that he wants to, it is really a big game changer,” EMCA head coach Richard Joiner said of Pettus’ kickoff return scores.

Brant Evans threw a 57-yard touchdown pass to Diontae Chapman and a two-point conversion gave EMCA an early 8-0 advantage with 7:16 left in the opening quarter.

After a Meadowview drive ended with a fumble by Shelby York at the 3-yard line, the Trojans’ defense made its presence known. Dakota Sanders pummeled Chapman in the end zone for a safety, making the score 8-2 Wildcats.

After EMCA’s punt following the safety went out of bounds at the EMCA 33, Meadowview took advantage with a game tying drive. Chris Maul fumbled as he crossed the goal line and Josh McDonald recovered in the end zone for a touchdown to make the score 8-8.

McDonald’s touchdown was on the final play of the first quarter and was the first of 28 points in 55 seconds.

Pettus took the ensuing kickoff back 80 yards for a score to put EMCA up 14-8. Heath Day answered with a 70-yard kickoff return of his own down the home sideline to tie the game back up.

When York ran in the two-point conversion, Meadowview led 16-14, but the lead would only last a few seconds.

EMCA’s Ahmaud Maxie made it three consecutive kickoff returns for touchdowns, running 65 yards to give EMCA a 22-16 lead.

Meadowview answered after a high snap on a punt gave the Trojans the ball at the EMCA 10-yard line.

Sanders punched it in from 2 yards out to tie the game and York’s two-point conversion run gave Meadowview a 24-22 lead with 7:23 left in the second quarter.

The Trojans would score a second safety after EMCA’s next snap soared over Chapman’s head, leaving the quarterback with little choice but to swat the ball out the back of the end zone.

With the score at 26-22, that would be Meadowview’s final lead of the night. EMCA scored the game’s next 34 points.

Chapman connected with Pettus on 60 and 68-yard touchdown passes before halftime to make the score 36-26 EMCA at the break. Pettus then returned the opening kickoff of the second half back 75 yards for a score to make it 42-26.

With the Meadowview offense unable to keep answering, Pettus finished the Trojans off in the third quarter. He ran for touchdowns of 27 and 40 yards in the third to break the game wide open.

Friday’s game was the final of Meadowview’s season.