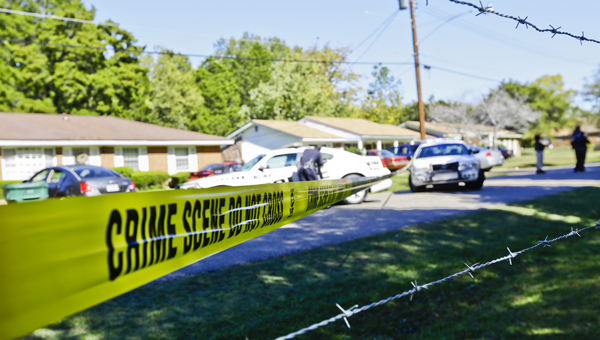 Selma Police Department officers work the scene of a traffic stop Wednesday off Magnum Avenue, where a Selma officer discharged his or her gun after a scuffle.

A Selma Police Department officer has been put on paid administrative leave after discharging a gun Wednesday following a scuffle during a traffic stop.

Selma PD responded to a domestic violence call in the 1200 block of Woodrow Avenue at about 12:20 p.m. When officers arrived at Selma Square Apartments, they learned their suspect had just left the scene in a vehicle, said Selma Lt. Johnny King, the department’s Internal Affairs Division commander.

Police caught up with the car on the 1000 block of Mangum Avenue, and an officer recognized Ricky Mitchell, 22, in the rear seat as someone who had outstanding arrest warrants.

The commander said the situation continued to escalate.

After a brief foot pursuit Mitchell, of Selma, was taken into police custody, King said.

Officers examined the suspect and found he sustained a minor abrasion, according to King. He was taken to Vaughan Regional Medical Center and later released to the Dallas County Jail.

Selma Police Chief William T. Riley declined to comment Thursday on whether or not the officer’s discharge of his or her weapon caused Mitchell’s injury.

The Alabama Bureau of Investigation was notified and is now in charge of the investigation.

The officer who fired the weapon has worked for the department for about four years and will continue to be on administrative leave until further notice, according to Riley.

In the photo above, Ted Henry walks next to one of the kilns at Henry Brick Company before his retirement... read more