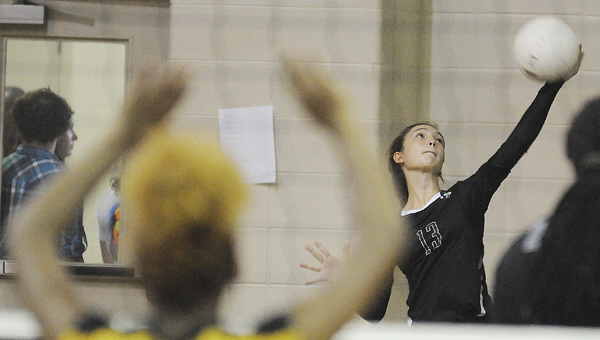 The Dallas County Hornets will face Rehobeth at Cramton Bowl in Montgomery Friday night at 6:45 p.m. in the South Super Regional. –File Photo

Meadowview Christian (11-1) will take on Lindsay Lane in the first round of the Alabama Christian Education Association’s varsity volleyball state tournament in Oxford.

The Trojans come in red hot, having not lost since a match since Aug. 19, but so does their opponent. The Lions (15-0) have not lost a game all season, according to standings on the ACEA website.

Meadowview head coach Tim Burton said he doesn’t have a great warmup  speech or special message planned for his team before they take the court for their first round match Friday. Instead, he will ask them a simple question.

“I’ve asked them, this year and last year, a simple question: Is there anybody here that doesn’t know how to play volleyball?” Burton said.

The Trojans seem to have answered that question again and again with their play this season.

If they can do it again Friday with a win over Lindsay Lane, Meadowview will play the winner of the Trinity-Tuscaloosa match at 6 p.m. in the semifinals of the winner’s bracket.

If the Trojans take the easy path and go through the winner’s bracket, Meadowview is four wins away from the school’s first varsity volleyball championship.

The school won the 2011 junior varsity volleyball championship with a lot of the same team. Five of the current varsity starters were on that team.

The championship game is scheduled for 3:15 p.m. in Oxford Saturday.

The Hornets will face one of their toughest tests of the season Friday against Rehobeth in the Alabama High School Athletic Association’s South Super Regional at Cramton Bowl in Montgomery Friday night at 6:45 p.m.

Rehobeth (33-11) was ranked No. 10 in Class 5A in the final rankings from the Alabama Sports Writers Association.

Dallas County defeated Sumter Central in three sets in the first round of the Class 5A, area 6 tournament before losing to Demopolis in the championship game.

“We actually led in the first two sets of the Demopolis game,” Moore said. “We just are not at the level where we can put a team away. We let them back in the game.”

Despite that, the Hornets are a completely different team from where they were at the beginning of the year. Moore said she has seen a lot of growth in the Lady Hornets.

“This team has really done a fantastic job. The girls get along so well with each other and I think that is key with any team,” Moore said. “The players have to get along with each other. These girls are not only teammates but they are friends and that says a whole lot.”

Moore also knows the Hornets have a big challenge in front of them if they want to keep their postseason run going.

“Our key to win tomorrow is to stay focused and work hard and compete,” Moore said. “That’s what we have been preaching all season.”

Cook off features wild game from all over the state