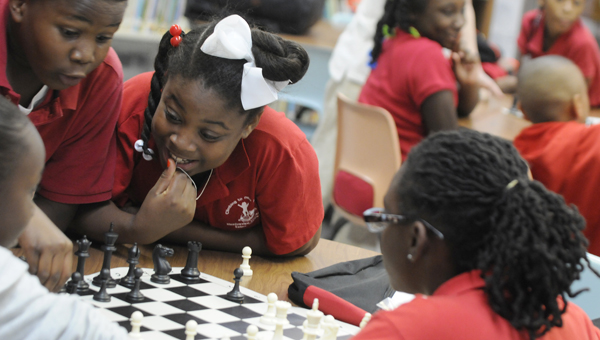 Meadowview Elementary School’s library was buzzing with excitement Tuesday as dozens of students gathered for their second chess club meeting.

With some help from Rural Alabama Research and Community Development Institute, the school recently created a chess club meant to teach students how to play the game and apply it to real-life situations.

The action is part of the institute’s initiative to promote chess throughout the Black Belt Region, according local representative Charles Robertson.

“Research has indicated that students who learn the game increase in their cognitive abilities, which we know will ultimately raise their academic achievement,” Meadowview principal Julius Shanks said. “The exposure will benefit them beyond elementary into middle school, high school and college.”

While some may perceive chess as a game for the older generation, the increasing numbers of young participants in the U.S. Chess Federation represent a growing interest among children.

According to the group, 31,167 of its members are age 14 and younger, which indicates a 25.4 percent increase of young participants over a decade.

Robertson, who leads Meadowview’s chess club, said different elements contribute to a student’s ability to learn and eventually master the game, such as parental involvement.

“When you look at some of the bright, innovative, intellectual protégées, you see their parents were the major factors,” Robertson said. “Our kids do not achieve independent of the parents.”

When it comes to practicing, Robertson would like the students to take chess as personal as he has learned to do.

“We have to become personal on our objective because the basic is to know when to sacrifice a piece and what that does,” Robertson said. “Chess parallels real life. In what ever you do, you’re responsible for the subsequent of that.”

Khadijah Ishaq, a grandmother of three Meadowview Elementary students, introduced the idea to have a chess club at the school, and she’s glad to how much excitement it’s brought the students.

With two years of chess experience behind him, Meadowview Elementary fourth grader Colton Baggerly said he is excited to help tutor other members of the chess club on a game he has grown to love.

“I like the game,” Baggerly said. “It’s interesting how you have to think about the way you move before you move your pieces.”

Robertson said his institute plans to meet with other principals throughout Dallas County to encourage them to also start a chess club, so more area students can benefit from the game and possibly even go on to represent their school in competitions.