Battle back in Selma for QB club 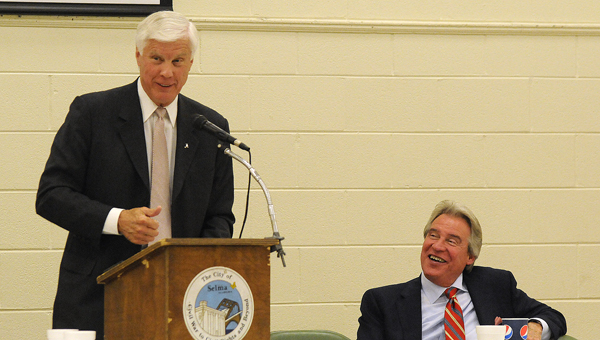 Long before Bill Battle was the director of athletics at the University of Alabama, he was making a career in Selma.

When Battle returned Monday night to speak to the Selma Quarterback Club, he spoke about the city he once called home and the impact it had on his life.

“We spent six years, from 1977 to 1983, here and they were great years in our life and in the life of my family,” Battle said. “Life revolved around school, the church and the country club here.”

Of course, it very nearly didn’t happen. Battle, who had already been a successful football coach at Tennessee in the 1970s, admitted he wasn’t too fond of the idea of moving to Selma, a small town that he knew little about. Entrepreneur Larry Striplin eventually convinced him to give it a chance.

“It is amazing how many people have come through Selma sometime in their life, whether it was Craig Air Force Base or whatever it was,” Battle said. “Everything I started finding out about Selma was positive.”

His work in the private sector peaked his interest in licensing, which was a growing industry.

In 1981, he founded the Collegiate Licensing Company and served as president and chief executive officer until 2002.

The CLC ended up being one of the reasons he left Selma, because he eventually bought the company out and moved it to Atlanta. After selling the company, Battle was enjoying life at a slower pace, believing he was retired.

“It was the greatest honor I’ve ever had,” Battle said. “I decided that after a week of going from, ‘Heck no, I’m not going to do it’ to “Maybe I should do it,’ to “If I don’t do this I’ll regret it the rest of my life.’ I’m so glad that they called.”

A native of Birmingham., Battle attended the University of Alabama on a football scholarship and enjoyed a successful playing career as a three-year starter from 1960-62.

He was an Academic All-SEC selection as a senior in 1962. He was named first team tight end and second team defensive end on The University of Alabama All Decade Team of the 1960s.

Battle now runs one of the nation’s most powerful athletic programs and oversees around 300 staff members and 525 student athletes in 21 sports.

The Selma Quarterback Club will be off next week before welcoming Alabama State head football coach Reggie Barlow on Nov. 3.