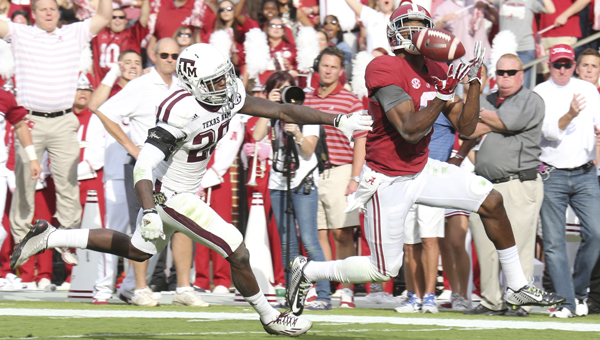 TUSCALOOSA (AP) — Alabama looked every bit the part of a national title contender, with a point-a-minute attack and a defense that planted a goose egg on one of the nation’s most prolific offenses.

Blake Sims passed for 268 yards and three touchdowns and scored on a 43-yard run while leading the seventh-ranked Crimson Tide to 35 second-quarter points and a 59-0 pummeling of No. 21 Texas A&M on Saturday.

The Tide (6-1, 3-1 Southeastern Conference) shut down the nation’s No. 4 offense and dominated a game that had produced two straight thrillers.

“I think this is as close as we can get to the Alabama football that we want to try to get from our players in terms of effort, toughness, emotional excitement and execution that we got throughout the game,” Alabama coach Nick Saban said.

Alabama set a school record for most points in a quarter and matched the second-most scored in a half while racing to a 45-0 halftime lead.

It was Alabama’s largest margin of victory since a 62-0 defeat of Tulane in 1991. It was also the Tide’s most lopsided SEC win since beating Vanderbilt 66-3 in 1979.

Yeldon had 114 yards and two touchdowns on 13 carries, all in the first half. Cooper gained 140 yards on eight catches with a pair of touchdowns.

Sims completed 16 of 27 passes before exiting midway through the third quarter.

By halftime, it seemed Alabama could name its score.

The Tide had 30 first downs to Texas A&M’s eight after facing doubters following a 14-13 win over Arkansas and a loss to No. 3 Mississippi. Saban even grew frustrated that some Tide fans were disappointed by such a close win.

That’s hardly an issue this time.

Johnny Manziel and Texas A&M had set a record for an Alabama opponent with 628 total yards last season in a 49-42 loss. The Aggies came in averaging 565 yards a game, but coach Kevin Sumlin called the performance “embarrassing.”

“I thought we were prepared,” Sumlin said. “I thought we had energy during the pregame warmups. Obviously the performance was extremely poor.”

It’s the first time Texas A&M has been shut out since a 77-0 loss to Oklahoma in 2003 and the program’s second-largest defeat.

Kenny Hill could never get them going. He was 17 of 26 passing for just 138 yards — 220 below his average — and was intercepted for the sixth time in three games long after the outcome was determined.

“We just tried to confuse the quarterback as much as possible, and play sound football, fly to the ball,” Alabama safety Landon Collins said. “If we fly to the ball, they can’t make good plays on us.”

Freshman Kyle Allen replaced Hill in the fourth quarter and had to chase down a high snap in the end zone on his first play.

The Aggies couldn’t even get a spark from the return of star receiver Malcome Kennedy from a separated shoulder that sidelined him for two games.

“We go into every game expecting to win, expecting a great performance,” Kennedy said. “This game we just got exposed a little bit more.”

The Tide scored on its first eight possessions, all touchdowns after the opening drive.

Alabama hit the locker room with a 449-51 advantage in yards and no doubt about the outcome.

The Tide did have some standout plays in a game full of ‘Bama highlights.

Sims flashed his running ability with a nifty touchdown run when he faked to Yeldon, made two defenders miss and won a footrace to the end zone.

Loss to Clarke means no playoffs for Panthers