Loss to Clarke means no playoffs for Panthers 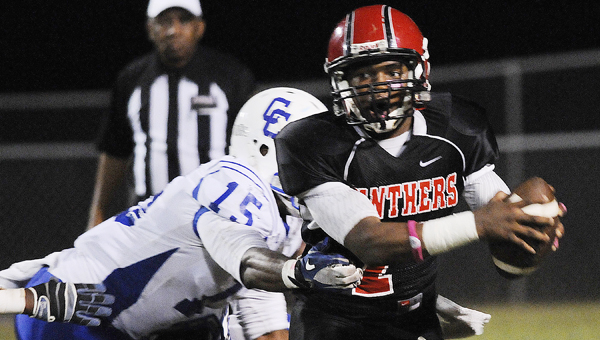 Southside quarterback Khamari Gibbs looks for an open receiver in Friday night’s loss to Clarke County. The Panthers had little success on offense until the second half in the 48-26 defeat.–Daniel Evans

Southside’s playoff hopes came to an end Friday night against Clarke County in a 48-26 loss where the Panthers never got out of their own way.

Southside fumbled five times in the first half  — losing four — to set up Clarke County touchdown drives to help the game get out of hand.

Most of the mistakes came on special teams, where the Panthers fumbled two snaps and had a punt blocked. Clarke County was more than happy to capitalize, winning its fifth consecutive game to clinch a playoff spot.

“It’s a lot easier when you are working with half a field,” Clarke County head coach Keith Kelley said. “Our special teams did a good job there. We got a little sloppy at first on offense but we got things together and got rolling after that.”

Six of Clarke County’s seven touchdown drives started in Panthers’ territory and the one that didn’t began at the Clarke 44-yard line. Southside paid the price for the mistakes, as the loss officially marks the ninth straight year the Panthers will miss the playoffs.

“It’s disappointing. My goal every year is to win every game,” Flowers said. “I thought we had the players in place to do it but mistakes and injuries killed us all season. Some things you [overcome] playing football but you can’t beat injuries and you can’t beat mistakes. I think both of those caught up with us.”

Meanwhile, Clarke County showed it is ready to be a formidable opponent to whoever it might face in the 4A playoffs.

Justin Smith threw a 24-yard touchdown pass to Jacorey Snell with 11:05 left in the first quarter to put Clarke up 7-0. The first Southside fumble — a high snap over the head of quarterback Khamari Gibbs — set the Bulldogs up at the Panthers’ 10-yard line. Southside’s defense forced a fumble one play later and Scott Cole fell on the ball to give the Panthers possession again.

Another high snap derailed Southside’s best first half drive of the night, forcing a punt, which was fumbled. Clarke County took over at the Southside 9-yard line, but the Panthers’ defense once again got a big stop to keep the score at 7-0.

Southside’s offense couldn’t get going anything going and had to punt once again.

Clarke finally found an answer to the Panthers’ defense, as Arthur Yelder ran 26-yards right up the middle for a touchdown to give the Bulldogs a 14-0 lead with 2:54 left in the opening quarter.

Brandon Hollins scored Clarke’s next touchdown on a 9-yard run around right end to make it 21-0 Bulldogs with 11:48 left in the second quarter. Then Hollins added another score on a 3-yard touchdown with 7:15 left in the half.

Jhlandius Sullivan gave the Panthers some hope with a 66-yard kickoff return, setting Gibbs up for a 1-yard score to get the Panthers on the board. After Gibbs’ two-point try was successful, Southside had trimmed the lead to 28-8 with 5:19 left in the second quarter.

Unfortunately for the Panthers, that was as close as they would get the remainder of the evening.

Clarke erupted for three touchdowns in the closing five minutes of the first half. Kenneth Horn scored from 1-yard out, Yelder added a 2-yard score and RaShon Horn scored with 1.1 seconds left in the second quarter to make it 48-6 at the break.

The quarters were trimmed to six minutes for the second half of the game.

Southside’s offense did find some life in the last few minutes. A 4-yard run by Sullivan with 1:20 left in the third quarter pulled the Panthers within 48-12. A 71-yard pass from Gibbs to Sullivan set the Panthers up in great field position with under two minutes left in the fourth quarter. Sullivan did the rest, scoring on a 1-yard run to make it 48-20 with 1:30 left to play.

Clarke recovered the Panthers’ next onside kick attempt and kneeled the ball twice to end the game.

Southside will play at W.S. Neal on Friday night, while Clarke will host Thomasville.