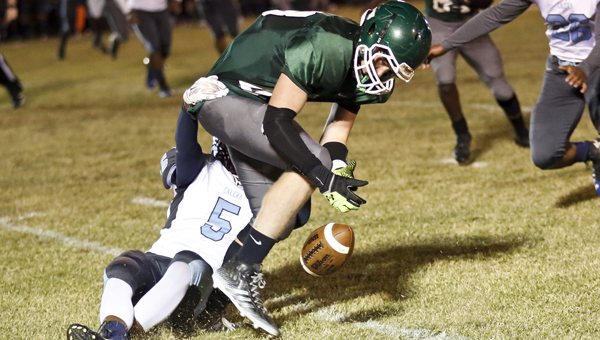 PLANTERSVILLE — Dallas County (2-6) saw its playoff hopes come to an end Friday night after a 43-19 loss to region rival Calera.

“This knocks us out of the playoffs,” Dallas County head coach Marty Smith said. “But it did not change the legacy these seniors can leave from the foundation for this program for years to come. These seniors understand that.”

Calera scored first to take a 7-0 lead, but the Hornets quickly answered as Xavier Knight ran the ensuing kickoff back for a touchdown. Dallas County missed the extra point attempt.

Calera scored the game’s next two touchdowns to take a 21-6 lead with 4:49 left in the opening quarter. The Hornets answered with a Calvin Starks Jr. touchdown run to pull within 21-12. Calera tacked on another score to make it 28-12 Eagles and then stopped Dallas County inside the 10-yard line as the first half came to a close.

“Calera’s offensive and defensive line dominated the football game and limited scoring opportunities for us and created great ball control and scoring on the ground,” Smith said.

The Eagles’ kept producing offense in the second half, and defensively allowed only a Marcus Edwards touchdown from Dallas County.

Dallas County will face Demopolis next week at Selma’s Memorial Stadium, while Calera will take on Sumter Central.