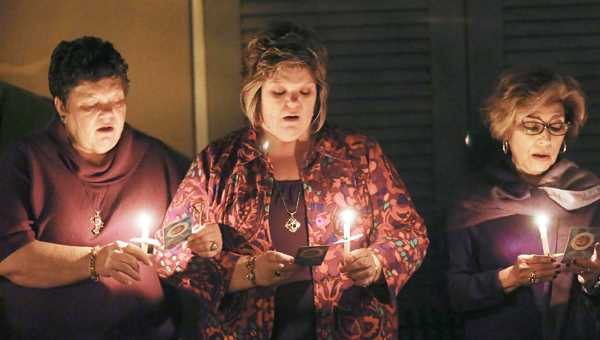 Members of the community wore purple and lit candles Thursday night at the Saint James Hotel, to recognize those who have been victims of domestic violence. The vigil was organized by SABRA Sanctuary. (Alaina Denean | Times-Journal)

The community of Selma gathered together Thursday night to hold a candle light vigil in honor of those who have been affected with domestic violence.

SABRA Sanctuary in Selma is a safe-haven for women and children who have gone through the struggles of domestic violence.

According to The National Coalition Against Domestic Violence, one in every four women will be a victim of domestic violence during their lifetime, and an estimated 1.3 million women are victims of physical assault by an intimate partner each year.

Throughout the 20 years SABRA Sanctuary has operated in Selma, organizers have held a candle light vigil in honor of those that have dealt with the pain and suffering.

“It’s a night where we can all come together for domestic violence, and remember why we’re here,” said Nancy Travis, executive director of SABRA Sanctuary. “We honor our survivors, and remember our victims.”

It is estimated that every nine seconds, a woman is being abused by their significant other.

During the vigil, a bell was rang every nine seconds to remind those in attendance, of the women who fall under the statistic.

“(Domestic violence) is something that we, in our lifetime, would love to see gone,” Travis said.

During the vigil, Travis spoke about the different attributes that the sanctuary has to offer. She expressed that women can gain the knowledge to learn what to do, and how to get out of an abusive relationship.

“We hope with this knowledge, (women) will get out, and understand that they are the victim … and they didn’t deserve to be abused,” Travis said. “We do counseling, we have a safe house for them to come to, we do everything we can to help them while they’re in our safe house.”

After Travis spoke, survivors spoke about their horrific experiences with domestic violence, but in the end they all had the same message — abuse is not love.

“We hope to one day end the violence, and in the mean time, we’re here for the victims,” Travis said.

During the month of October, Travis is encouraging everyone to wear purple, in support of those who have been a victim of domestic violence.

“It’s a time to recognize and honor these women who have struggled,” Travis said.

Selma native Ryan Bergeron is preparing to open Revival Coffee Company, a local roaster that will be housed at the... read more