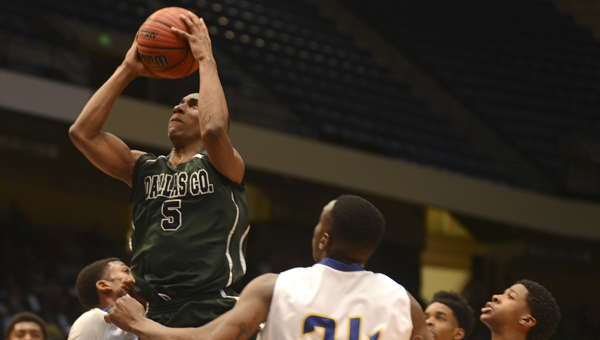 Dallas County High School’s Jerrod Moorer goes up for a shot in last season’s class 4A state basketball championship game against J.O. Johnson. Moorer and the Hornets will hold their first basketball practice of the season Friday after the Dallas County football team plays Calera in Plantersville.–File Photo

PLANTERSVILLE — With two 6-foot-11 post players, tt was hard to score on Dallas County last season. William Lee and Lowell Furlow manned the post, daring opponents to score from the outside and rejecting most of the shots attempted in the paint.

The Hornets rode the two gargantuan-sized players all the way to the school’s first class state basketball championship.  Now the challenge is to do it without one of them — and perhaps both.

When Dallas County takes the court for its first basketball practice of the year Friday night, which will follow the Hornets football game against Calera, neither Lee or Furlow will be on the court. Lee, who won the Alabama Sports Writers Association’s Mr. Basketball award last season, is now at UAB, where he is expected to play a key part in the Blazers’ rotation. Furlow is recovering from knee surgery, leaving his status for this upcoming season cloudy.

Moore said his team will run through a basic practice Friday night following the game, although many of his players will be missing because they play football.

He said he wanted to give Hornets’ fans a look at what the team had coming back and the best chance to do so was following the last football game in Plantersville this season. Dallas County’s final “home” football game against Demopolis will be played at Memorial Stadium.

What fans will likely see is what Moore has known for a while — this year’s team will be guard oriented. The veteran coach has a lot of confidence in his guards, especially seniors Raheem Phillips, Jerrod Moorer and Kendell Motley. All three players started on last season’s state championship squad.

“I wouldn’t want to play this team,” Moore said. “We can cause matchup problems in a different way. We don’t have a 6-foot-10 guy inside that can control the paint, but we can play against teams that have really good guard play.”

Although his team won largely because of its dominance in the post last season, Moore said most high school teams are more effective when they are led from the guard position.

“If you ask most coaches, if you are going to be strong at one particular position you’d rather be loaded at the guard position,” Moore said. “You can have great post players but if you don’t have anyone to get them the ball it doesn’t really matter.”

In part because of the leadership of those three players, Moore expects his team to come in hungry and ready to go to work Friday night.

“Hopefully our kids won’t come in and be complacent and won’t have a sense of entitlement,” Moore said. “My kids know that every time we go out and play a game this year, everybody wants to beat us because they want to beat a team that won a championship. I made sure my kids understand that even though they were a part of it, this is a different team than the championship team.”

The Hornets schedule is not completely finalized yet.

Moore is hoping to add a home game at the beginning of the season, but at this point those plans are still in the works.

Panthers in need of a win versus Clarke