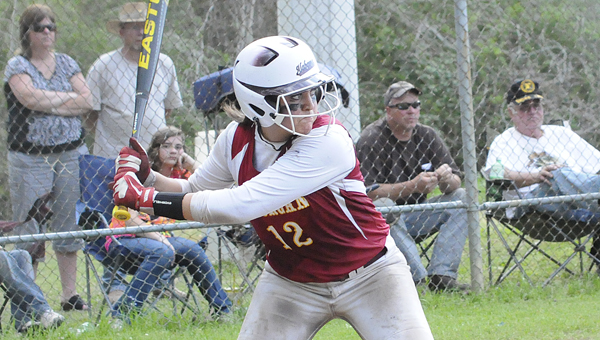 Ed Miller knew early on that Kendall Veach was a special softball player. He found out pretty quickly how right he was.

In 2011, Veach was just an eighth grader at Martin Middle School that was so talented she was playing on the Dallas County High School varsity team.

“I remember we went to Montgomery or somewhere and she was a little bity, skinny thing,” Miller, who was coaching at Dallas County at the time, said. “I remember one of those big old girls ran over her and knocked her to the backstop. She was just rolling and she just got up just covered in dirt and just jumped right behind the plate. I said, ‘Oh gosh, she’s tough.”

Veach showed how good she was with her bat just a few weeks later, as she hit a homerun in extra innings that led Dallas County to its first ever state softball championship.

Now, both Miller and Veach are at Morgan Academy. Veach, now a senior, has reached another milestone in her softball career. In just under a month, on Nov. 12, she  will sign a softball scholarship with Auburn University to accomplish her childhood dream of playing collegiate softball at a high level.

“I was at a loss for words,” Veach said about when Auburn coaches told her they were offering her. “It was all of a sudden.”

Veach made sure to think it over, but once she saw the Tigers’ campus, she knew where she wanted to be.

“Immediately I fell in love with it. I did wait a day or two and talk it over with my parents and some of my coaches and I said ‘I’m going to follow my heart and go to Auburn,’” Veach said.

Veach said it wasn’t easy to call South Alabama — where she had been committed since the tenth grade — and let the Jaguars’ coaching staff know she was changing her verbal commitment, but she knew it was the right call. Auburn just blew her away.

“The coaching staff really knows what they are talking about,” Veach said. “They know every little part of the game.”

Miller said Veach has worked hard to get to play Division I softball.

“She works every day on softball,” Miller said.

“She has improved her hitting and her defense and the biggest thing is how smart she is.”

One of Miller’s favorite stories about Veach is how she slid around a tag at home plate in a game against Glenwood. The catcher had the ball well before Veach got to the plate, but she found a way to slide around and be safe.

“She just slid completely around and went all the way around the bag and reached back and grabbed the bag,” Miller said. “The [opposing catcher] was shocked. She swiped at nothing.”

Veach, who played catcher for the Senators last year, hit 14 homeruns  for the Senators and batted near .450.  When she gets to college, she will get to test her game against some of the game’s best batters and hitters.

“It is really going to test my skills and knowledge,” Veach said. “I’m really excited to see where I rank with bigger ball players.”

Of course, Veach’s extraordinary high school playing career isn’t over just yet and she and Miller, who plans to retire after the season, have a couple of goals in mind.

“Coach Miller and I talked about it,” Veach said. “We want to have the best batting average out of the whole AISA, and we want to win the state championship this year.”