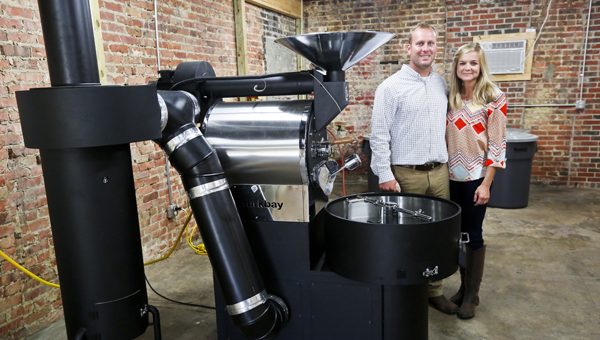 Selma native Ryan Bergeron is preparing to open Revival Coffee Company, a local roaster that will be housed at the Arsenal Place Business Accelerator. Bergeron is shown with his wife, Kennedy Smitherman Bergeron.

Ryan Bergeron has an idea brewing at the Arsenal Place Business Accelerator.

Bergeron hopes to brew the best coffee in the region while making a difference close to home and across the world.

The idea to open a roaster was first planted more than a year ago by Bergeron’s friend Robert Armstrong, founder of Selma Good Co.

“I said I can’t do this right now. I need to pray about it and look into it,” Bergeron said.

“It seemed like every step I took there was confirmation to go with it. There were some really neat God moments in the process,” he said.

Bergeron took a leap of faith and left construction work to focus on starting his own business.

“I knew [there] wasn’t where I was supposed to be in life. It was time to be the change and stop waiting on a change,” he said. 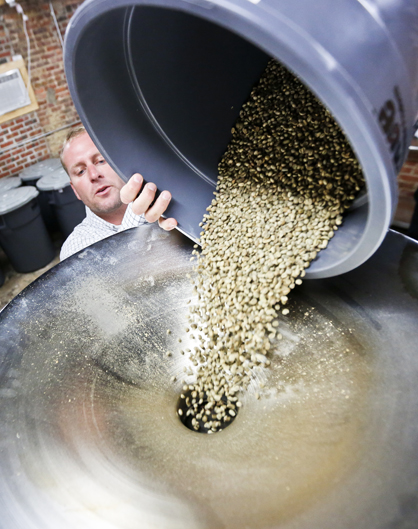 Ryan Bergeron is shown and below dumping beans into the roaster.

Bergeron said he took the name Revival Coffee Company and slogan “Awakening a Nation” because, “That’s what coffee does, it wakes us up but that’s what revival does as well.”

Now with a roaster that took 10 weeks to arrive from Turkey, Bergeron’s business is drawing interest across Selma, especially when the wind blows just right.

He hopes to have coffee available in November, but in the meantime, he continues to perfect blends. He has plans to travel to Vermont next week to learn even more about the process.

Each blend will help support a certain nonprofit organization. He has plans for a Redemption blend for scholarships and a Restoration blend to help with the Teen Challenge.

Bigger dreams down the road include helping Meto, Kenya set up coffee farms. Years ago, Bergeron and his wife, Kennedy, traveled to Kenya on a mission trip with Integrity Worldwide.

“Since that trip, I have always had a desire to do more to help the people in Meto,” Bergeron said.

He also hopes to employ local young people and help them find careers. Three or so years ago, he would pray with people in assistant housing as part of the Blue Jean ministry.

The number one thing young men wanted to pray about was that they would find a job.

“It seems like every young man’s prayer was to find a job. There was a lot of guys there — they just didn’t have a chance,” Bergeron said.

Revival’s coffee comes from all over the world, including Brazil, Columbia, Costa Rica, Kenya and Sumatra.

Bergeron hopes to sell at local retail stores, coffee shops and churches as well as through fundraisers for schools and other youth activities.

It will be sold both ground and whole and online as soon as November at www.revivalcoffees.com.

Selma Mayor George Evans was all smiles Wednesday during his fifth annual Mayor’s Charity Gold Tournament. Although every putt he... read more