Alleged robber shoots victim in hand, himself in leg during scuffle

A Selma man is behind bars after allegedly shooting another man and himself during a robbery, according to the Selma Police Department.

As of Wednesday morning, Jackson was in the Dallas County Jail without bond.

Selma officers responded to the 1400 block of Franklin Street at about 1:56 p.m. Tuesday and found a 41-year-old victim with a gunshot wound to the right hand.

“The victim stated that two black males, both with dreadlocks, had forced their way into his residence,” said Lt. Curtis Muhannad, with the Selma PD. “After he had spoken with them outside his residence, the [one] male pulled a gun.”

The victim told investigators a struggle ensued with the gunman, while the other suspect began to assist in the scuffle. The gunman reportedly fired a shot that struck the victim in the hand and himself in the leg, Muhannad said.

The suspects made off with $30 to $35 before fleeing the scene. 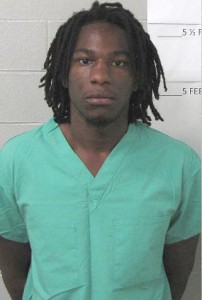 While investigating the robbery, Selma PD received another call about a man who arrived at Vaughan Regional Medical Center with a gunshot wound.

Officers were dispatched to the hospital and found Jackson, who was being treated with a gunshot wound to his left thigh.

Jackson told officers he was the robbery victim. A photo lineup was done at the scene and presented to the victim, who identified Jackson as the person who shot him. The victim couldn’t identify the second suspect.

After Jackson was treated and released from the ER, he was detained and taken to the Selma PD for an interview that gave the department enough probable cause for an arrest, Muhannad said.

Muhannad said the department continues to look for the second suspect.

Selma native Ryan Bergeron is preparing to open Revival Coffee Company, a local roaster that will be housed at the... read more