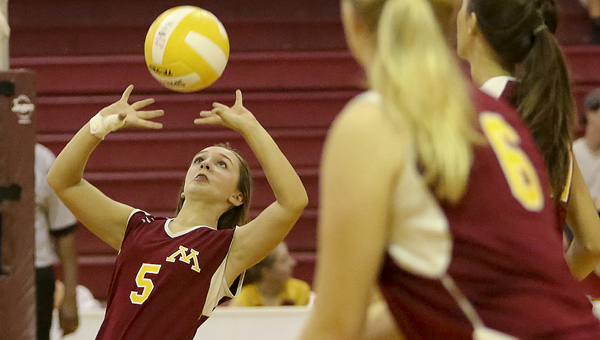 Morgan Academy junior varsity volleyball player Mary Grace Morgan sets up a teammate in a game aerlier this season against Edgewood Academy. The Senators finished second in the JV state tournament this weekend, losing to Kingwood Christian in the championship match.–Doug Horton

“They decided at the beginning of the year that they were going to be all for one and one for all,” Morgan Academy head coach Carolina Averitt said. “That was our motto from day one and their goal was to go to the state tournament, because that was something they had not done.”

The Senators nearly won the entire tournament, only coming up short against a Kingwood team that was the class of the field.

“We do the small things,” Averitt said.

“We don’t have anyone that is 6-foot-5 that is going to kill the ball down your throat. We do the small things. We get our sets up and we get our kills down.”

Morgan Academy won its first two games of the state tournament against Pike Liberal Arts and Macon East, but lost its third game to Kingwood Christian to fall into the loser’s bracket.

The Senators defeated Coosa Valley to get a rematch with the Lions, but unfortunately the second match went a lot like the first.

Kingwood won the first set 25-2 and then survived a hard fought second set 26-24.

Averitt believes the Senators’ second place finish in the state tournament is the highest the junior varsity has ever finished at the state level.

Morgan Academy’s run through the junior varsity tournament was arguably the most success the Lady Senators have had in volleyball since the varsity team won the 2009 and 2010 state championships.

The football teams in Selma and Dallas County may be on their way to achieving a rare accomplishment, although it’s... read more