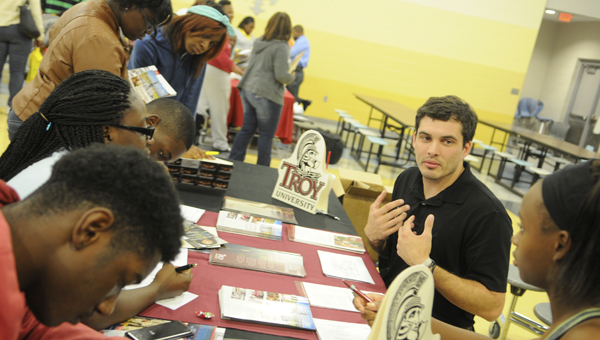 Tony Weaver, an admissions counselor for Troy University, speaks with area students at the college fair Tuesday. Held at Selma High, the fair was collaborative effort of Selma High and the Selma Chapter of Alpha Phi Alpha Fraternity, Inc.

Selma High and the Selma chapter of Alpha Phi Alpha Fraternity, Inc. hosted a college fair Tuesday that attracted more than 20 college recruiters, more than 200 students and the U.S. Army.

“I want to just expose them to different things, so they can see what’s out there,” said Wanda Young-Lowe, the senior counselor for Selma High. “You can always come back to Selma, but you need to leave to get more information so you can come back and help the community.”

The University of Alabama, Troy University and University of South Alabama were a few of many colleges who had recruiters at the fair to speak with Selma High, Keith High and other area students who attended Tuesday’s college fair.

“We want to make sure they know about these colleges, what it takes to get into these colleges and what financial resources are available to them,” said Warren Young, with Alpha Phi Alpha Fraternity, Inc.

Young said he was pleased to learn several students came with their parents Tuesday.

“We wanted to make sure that the kids and the parents get the information,” he said. “A lot of times it’s a team effort sending your child to college.”

Young-Lowe said it’s vital the students look at every aspect of each college they consider, such as how much it would cost to attend, where the college is located and which majors the college offers.

“They need to find a college that offers their major,” she said. “All schools don’t have the same majors, so it’s important that they are exposed to the program of study.”

While the fair was originally intended for seniors, it actually appealed to students in grades as low as eighth grade.

Because the preparation process for college can be timely, both Young and Young-Lowe were pleased to see so many young people.

“It’s never early to expose them,” Young-Lowe said. “That way they’ll see what they need to make on the ACT, the GPA they need and the type of classes they need.”

With the academics being a huge concern for Alpha Phi Alpha Fraternity, Inc. and Selma High, Young and Young-Lowe see the college fair as one of many collaborations between the fraternity and the school.

“We want to build partnerships,” Young said with a smile. “This is the beginning of a wonderful relationship between our fraternity and Selma High.”

Butler Truax Jewelers will celebrate its 50th anniversary with a week of activities planned between Monday and Saturday. By Alaina... read more