Hancock has continued his family’s love of cooking 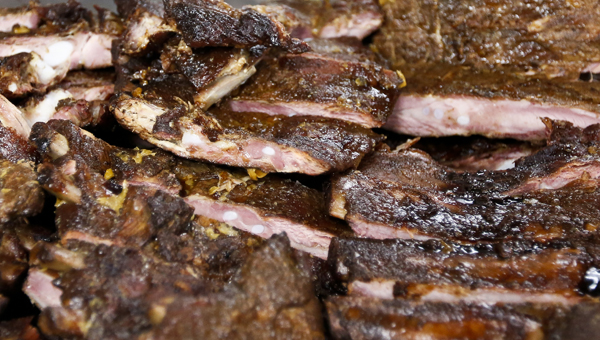 Hancock’s is known for its delicious barbecue. –Alaina Denean

A good story, an old family recipe and a great plate of ribs can go a long way in Selma. There’s no better place to see that in action than at Hancock’s Country BBQ, owned by Mike and Deborah Hancock.

The couple has been working together in the barbeque business for 35 years, serving the Selma community, and keeping the locals coming back for more.

“[Dad] and I hitch hiked here from Birmingham, not knowing anything about the restaurant business,” Mike said. “We got dropped off in Clanton, and we sat there for two or three hours, and a lieutenant came by and he dropped us off in Plantersville, and we stayed there for two or three hours, and then another officer picked us up and brought us to downtown Selma at Jeff Davis and Broad … the rest is history.”

Mike said his dad had heard about a restaurant that opened up selling 15 cent hamburgers, and the owner wanted to leave the area. Knowing nothing about the restaurant business, his dad bought the place the very same day they got to Selma, in 1965.

“My dad opened this place in 1973, it was a gas station converted into a hamburger/barbeque place,” Mike said. “He didn’t have a clue what he was getting into, but it ended up we’re still in it.”

After working with his dad for many years, Mike and his wife decided to try their luck in Tennessee.

Although his parents were more into the hamburger and short order business, Mike knew he wanted to do barbeque.

“We started out like everybody did with open flame pits, where you put your meat up and throw the hickory wood under, and you had to watch it real close,” Mike said. “In the last 10 years they’ve gone to rotisserie gas fire, wood fire stoves, and it’s really taken the labor out of it, and the expense out of it, it’s helped out a lot.”

Mike said it’s easier to regulate the meat now, more so than you could before.

He said not everyone can cook barbeque and make it good, but barbeque in general is all about the same.

“It’s the sauce that makes the difference,” Mike said.

In addition to their meat, Hancock’s is known for its sauce, and of course it’s a family secret.

“We’ve had an old family barbeque sauce forever, that goes back 150 years or so, and I kind of tweaked it around, and have been playing with it some,” Mike said. “It’s an old sauce that my great-great-great-grandfather had out west, as the story was told, and it passed down through generations, it had a couple of things in it that I changed, like the butter in it.”

He said they typically cook 24 gallons of sauce at a time, usually around three times a week.

According to Mike, the key to the perfect rack of ribs is keeping them cooked fresh.

He said they go through about 350 pounds of ribs a week, and average around 12 boxes of Boston butts at around 70 or 80 pounds a box.

They season the meat about three days in advance, and store them in their walk-in freezer, soaking up the flavors from the rub, before putting them on to cook.

“We’re constantly rotating our stock around and trying to give [the ribs] a little time to be seasoned,” Mike said.

He said it takes about eight hours to cook the ribs, and they cook them slow to keep them tender.

The Hancocks have two daughters, one of whom works at the restaurant with them, and the other is in the culinary business. Mike and his wife plan to turn the restaurant over to their daughters once they retire.

Mike said his business is successful because of the family orientated atmosphere. “My wife works side by side with me, and we’ve been working together for 35 years,” he said.

With the number of customers who come back over and over again, and even some who come back daily, the Hancock’s are sure to have the recipe for success.

“I love Selma,” Mike said. “I’ve been fortunate to have a good business.”