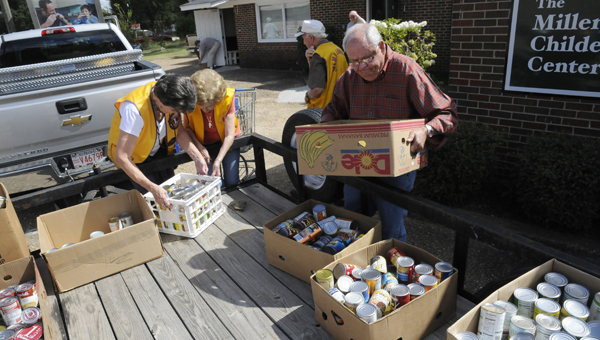 Selma Lions Club members unload a trailer of donated canned goods last week at the Christian Outreach Alliance. The food was given as admission during Kids Day at the Central Alabama Fair.

Kids Day at the Central Alabama Fair did more than bring smiles to the faces of those who attended — it will also help feed local families in need.

The Selma Lions Club delivered between 1,000 to 1,500 pounds of canned goods to the food bank.

The food was collected Oct. 1 at Kids Day, which allowed students between first and 12th grade to get into the fair with a canned good donation.

“We didn’t really expect this much, but we are proud of what we got,” said John Haskell, Selma Lions Club’s fair board manager. “Maybe next year, we can get more.” 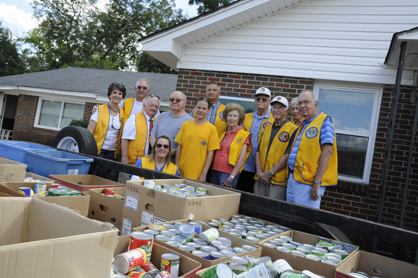 Selma Lions Club pose for the camera Wednesday in front of a trailer full of canned goods they donated to the Christian Outreach Alliance.

Admission to the last year’s Kids Day was free, but the Lions Club’s desire to find a new way to serve the community changed that.

The donations will be given to those who meet the federal government’s poverty standards, said Miller Childers, chairman of Christian Outreach Alliance board.

Miller said the group supplies at least 8.5 pounds of canned goods to each client, and the donations they received Wednesday were greatly appreciated.

“We have lots of generous people and organizations, and this is one of them that we really appreciate,” Childers said. “We’re so grateful because we couldn’t exist without the support.”

The Christian Outreach Alliance said the donations are coming a great time of the year, considering the fact its Stock the Shelves fundraiser is Oct. 24.

As a part of the fundraiser, the alliance is asking the public to drop off monetary or canned good donations at its building on 700 J.L. Chestnut Jr. Boulevard anywhere between 7 a.m. to 6 p.m. that Friday.