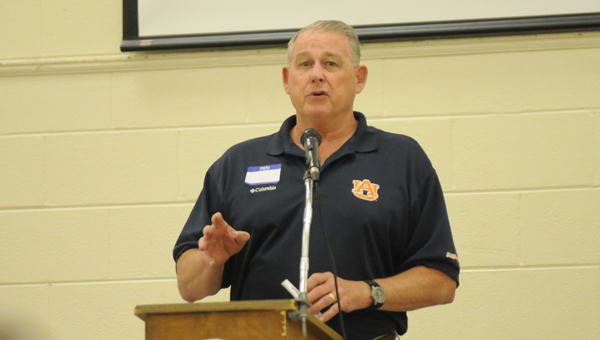 Selma welcomed back one of its own Monday when “Wild” Bill Cody returned to speak at the Selma Quarterback Club.

“It is a thrill to come back to Selma,” Cody said. “I got here pretty early and rode around. It has changed a lot since the last time I was here.”

Cody said he got his “wild” nickname in high school and it stuck, mainly because of his aggressiveness on the field.

“They claimed I was wild and reckless and all that,” Cody said. “It stuck. If I didn’t have some success I doubt it would have stuck.”

Cody, a linebacker, certainly had plenty of success. He was named All-SEC for three consecutive years at Auburn and was named the SEC defensive player of the year in 1965. His recruitment came down to Florida and Auburn, so when he picked the Tigers there were some sore feelings between himself and some of the Gator coaching staff.

“Coach Jordon said Bill, I know you momma, I know your daddy and I know your granddaddy, and if you want to amount to something, you need to come to Auburn,” Cody said.

Cody said his favorite moment playing football were his times playing against the Gators.

“I had four touchdowns as a linebacker against Florida,” Cody said. “That’s a little unusual. I think we took care of business.”

Cody was so great against Florida that Steve Spurrier, who played quarterback for the Gators in the 1960’s and won the Heisman Trophy in 1966, sent him a signed copy of his book “Gators.” On the inside cover, Spurrier wrote “To Bill Cody one of my top receivers in 1965.”

After his career at Auburn, Cody was drafted by the NFL’s Detroit Lions. He also played four years with the New Orleans Saints before finishing his professional career with the Philadelphia Eagles.

Cody had some great moments in his time in the pros. He was playing for New Orleans when Tom Dempsey made a 63-yard field goal, which was the NFL record until Matt Prater broke it last season. The kick was in 1970 and gave the Saints a 19-17 win over the Lions. He has a picture that he brought Monday of him blocking for Dempsey on the play.

“He kicked it a lot further than that in practice,” Cody said. “But this was different conditions. There was seconds left to go in the game.”

Cody now feels the effects from all of his time playing football.

He has been diagnosed with signs of dementia but has no problem remembering things from decades ago. He said he struggles mainly with short term memory, which includes things like remembering where he parked his car or what he did yesterday.

“Yesterday or the day before I don’t have the foggiest idea [what I did],” Cody said.