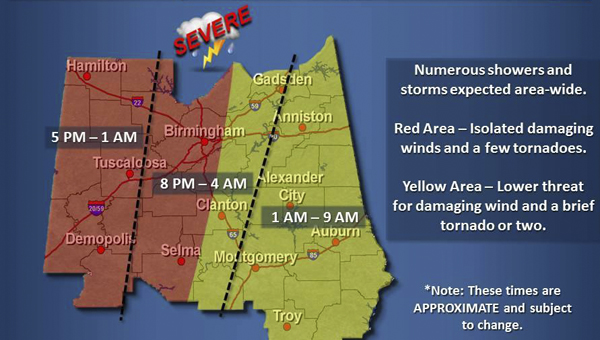 The main threat of severe weather in Dallas County will be from 8 p.m. Monday until 4 a.m. Tuesday. (Graphic by Birmingham National Weather Service)

Severe weather with the possibility of damaging straight-line winds and isolated tornadoes are possible Monday afternoon into Tuesday.

The weather threat will begin in west central Alabama on Monday afternoon and spread eastward overnight.

Although not the main threats, large hail and localized flash flooding are also possible.

Wallace Community College Selma will close at 4 p.m. Monday due to the threat of severe weather. No other closings or delays have announced.

Check back for weather updates.