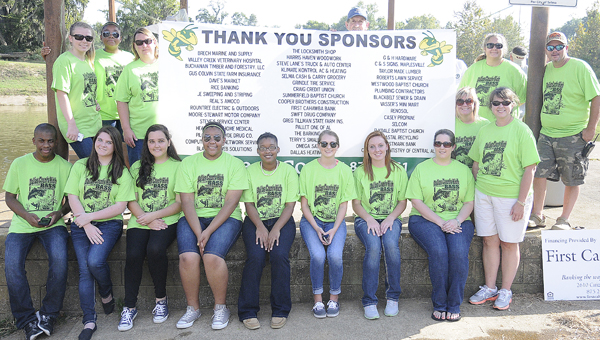 The top four finishers in Dallas County High School Bass Fishing Tournament won prizes, but the real winners were the current and future Hornets that will benefit from the proceeds.

Garrett White of Valley Grande and William Ross from Tyler won Saturday’s tournament at the Selma Marina with a total of 15.3 pounds and won $3,000 for winning plus another $250 for fishing in a Bass Cat boat.

White and Ross bested a field of 33 boats Saturday to win the tournament, which was run by the high school’s parent/teacher organization. The tournament raised $3,450 for the school.

“I was very pleased with all of the local support that we had,” Dr. Frances Kendrick, PTO president of Dallas County High School, said. “Most of the people who fished our tournament were local fishermen.”

The money raised will go towards any needs the school has, such as buying a new computer or new equipment for a classroom.

“With the crunch like there is with money, there just isn’t a lot out there,” Dallas County High School principal Michael Blair said. “Every penny we can get for the school just helps us out.”

Kendrick and Blair were both quick to point out the tournament would not have been successful without the help of dozens of sponsors, the Dallas County High School Beta Club and Brech Marine and Supply.

“I can’t say enough about Brech Marine, being out here working and getting it ready,” Blair said. “We’d all be lost if they weren’t helping us.”

Dale Brooks of Valley Grande and Mike Cutler of Selma finished second with a total of 15.6 pounds to win $1,000.

Third place was the Selma duo of Tiger Jones and Michael Smith who brought in 14.61 pounds and won $300.

A total of 47 sponsors helped the prize money be guaranteed for the tournament. Other sponsors pitched in by providing door prizes.

The Haunted History Tours are back for the eighth year, and Live Oak Cemetery is one of the several places... read more