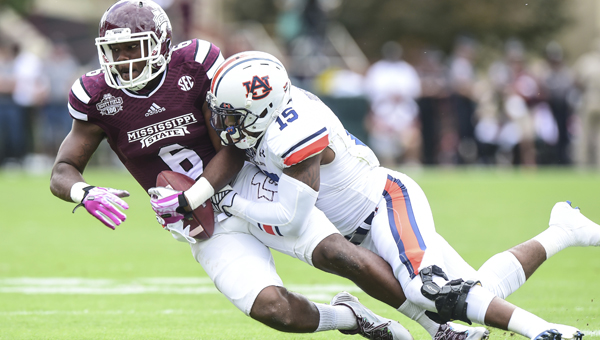 STARKVILLE, Miss. (AP) — Mississippi State coach Dan Mullen grinned broadly as he walked off the field, pumping his fist with one arm while holding his daughter Breelyn in the other. The deafening roar of the crowd’s trademark cowbells showered the field and the players danced around in celebration.

The biggest home game in Mississippi State history had just turned into its biggest victory.

Dak Prescott ran for two touchdowns and threw for another to lead No. 3 Mississippi State over No. 2 Auburn 38-23 on Saturday night at Davis Wade Stadium.

Prescott, who jumped into the Heisman Trophy conversation last weekend with a breakout game against Texas A&M, turned in another solid performance. He completed 18 of 34 passes for 246 yards while running for 121 yards.

He also had lots of help. Josh Robinson ran for 97 yards and two touchdowns, De’Runnya Wilson caught four passes for 72 yards, including a 34-yard touchdown catch, and the Bulldogs defense bailed out the offense with red zone stops following turnovers.

“Every time we needed to make a play, a guy stepped up and made a play,” Mullen said. “We always wondered how to take the next step in this league … that’s it.”

The Bulldogs jumped out to a stunning 21-0 lead in the first nine minutes — helped by two Auburn turnovers on its first two offensive plays — but the Tigers pulled within 28-20 in the third quarter. They couldn’t complete the comeback, though, undone by Ricardo Louis’ fumble in the fourth quarter, untimely penalties and an inconsistent offense.

“We have to learn from this,” Auburn coach Gus Malzahn said. “We had a similar setback to this last year. There are a lot of champions in that locker room. They are disappointed and they should be.”

The Bulldogs will find out on Sunday if the victory was enough to jump Florida State and earn the first No. 1 national ranking in school history. Florida State defeated Syracuse 38-20 on Saturday.

It was Prescott’s first game since a breakout performance against Texas A&M. For the most part, the 6-foot-2, 230-pound junior handled the increased scrutiny well, making plays with both his arm and feet.

The Tigers’ first offensive play was a Marshall pass that was tipped at the line of scrimmage and intercepted by Jay Hughes. The second was a fumble by receiver D’haquille Williams that was recovered by Benardrick McKinney.

Mississippi State turned them both into touchdowns.

A few minutes later, Prescott rumbled into the end zone for a 2-yard touchdown and the Bulldogs — who were hosting their first game between top five teams in school history — had a three-touchdown advantage.

But then it was Mississippi State’s turn to start committing turnovers, with four before halftime. The Bulldogs threw three interceptions — including one by Logan Cooke on an ill-fated fake punt — and Jamoral Graham fumbled on a punt return.

The Bulldogs held Auburn to two field goals before Marshall completed a 9-yard pass to Williams to pull the Tigers within 21-13.

That quieted the cowbells for a few minutes, but they roared again late in the second quarter when Prescott ran for a 15-yard touchdown and a 28-13 lead.

Auburn pulled within 28-20 on an impressive 10-play, 99-yard touchdown drive midway through the third quarter that was capped by Marshall’s 15-yard throw to Williams for the score.