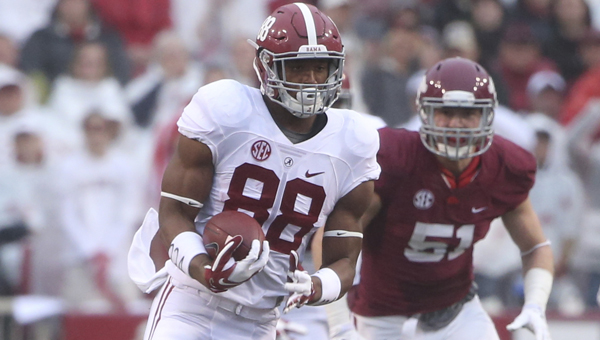 Alabama tight end O.J. Howard attempts to run away from an Arkansas defender during the Crimson Tide’s 14-13 victory Saturday in Fayetteville. –Kent Gidley | University of Alabama

FAYETTEVILLE, Ark. (AP) — Even after a week, Blake Sims wasn’t quite ready to let go of the frustration from the shocking loss at Mississippi.

The rest of the Alabama quarterback’s teammates played as if they were still hung up on the loss as well for much of a 14-13 victory at Arkansas on Saturday night.

Despite a second straight week of wildly inconsistent play littered with turnovers, Sims threw a pair of touchdown passes and the No. 7 Crimson Tide rallied for the win — narrowly avoiding another Southeastern Conference loss.

Alabama (5-1, 2-1) was outgained 335-227, fumbling four times on special teams along the way. But Sims’ 6-yard touchdown pass to DeAndrew White in the fourth quarter helped ease any leftover pain from last week’s 23-17 loss in Oxford.

“I think the thing that motivated us, helped us play so hard this week, was the loss (to Mississippi),” Sims said. “The loss hurt us so bad, because we knew we (were) probably better than the other team.”

The Crimson Tide, stymied offensively for much of the first three quarters, trailed 13-7 entering the fourth quarter.

However, it avoided a second straight SEC loss — which hasn’t happened since Nick Saban’s first year as coach in 2007 — thanks to a defensive effort that limited Arkansas to 5 yards rushing on 13 carries in the second half.

“Obviously, our team was very disappointed and responded well, I think, to what happened a week ago,” Saban said. “It’s tough on the road in this league, and our division is really, really difficult. There’s no easy games.”

The loss for the Razorbacks (3-3, 0-3) is their 15th straight in SEC play, a stretch that dates back to the 2012 season under interim coach John L. Smith.

An emotional second-year coach Bret Bielema, who has yet to win a conference game since leaving Wisconsin, was fighting back tears after the loss.

It’s the second straight disheartening defeat for Arkansas, which lost in overtime to Texas A&M two weeks ago.

“The part that kills me is for my players, their families,” Bielema said with a wavering voice. “Because they are winners. I can’t give them a ‘W’ … They’re getting frustrated. It is very frustrating for me.”

Brandon Allen was 21-of-40 passing for 246 yards for the Razorbacks, but his late interception helped seal the comeback win for Alabama.

Arkansas lost by identical 52-0 scores to the Crimson Tide in each of the past two seasons.

The Razorbacks outplayed Alabama for much of the game on Saturday — outgaining the Crimson Tide 300-145 through three quarters.

Despite a pair of lost first-half fumbles, including one by running back Kody Walker inches before he crossed the goal line for a touchdown, Arkansas took a 13-7 lead in the third quarter when Allen connected with tight end A.J. Derby for a 54-yard touchdown.