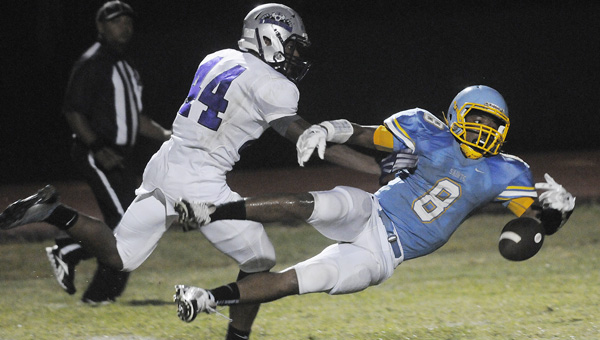 Selma’s Lekedrich Rogers attempts to catch a one-handed pass during the first half of Friday night’s game against Bessemer City. The Tigers won the game 28-21 after rallying from a second half deficit. The Saints fell to 5-3 on the season with the loss.–Daniel Evans

Selma’s playoff hopes took a hit Friday night when the Saints fell to Bessemer City 28-21 at Memorial Stadium in a game with no shortage of game-changing plays in the fourth quarter.

Bessemer City (3-4, 3-2) made the game’s final big play on a 72-yard touchdown pass from Antonio Stanton to a leaping Quay Marshall with 7:20 left to play to give the Tigers a lead they wouldn’t relinquish.

“The difference was they made a few more big plays than we did tonight,” Selma head coach Leroy Miles said.

In a stretch of 1:26 in the fourth quarter, the game featured a goal line stand by the Saints and three touchdowns between the two teams.

“When we stopped them, I thought we had them, even though we had a long ways to go,” Miles said.

On the very next snap, a fumbled handoff between Selma’s Marquell Moorer and Kerry Ford was recovered by the Tigers at the 4-yard line.

Marshall took the handoff on the next play and ran 3-yards for a touchdown to give Bessemer a 20-15 lead with 8:33 left.

Selma answered immediately, as Rashawn Reeves took the kickoff and ran it back 87 yards for a touchdown to put Selma back in front with 8:15 left.

It took Bessemer City only two plays to score the next touchdown, as Marshall leaped over Calvin Turner for the game-winning score.

“That catch was humongous for us,” Bessemer City head coach Martez Edwards said. “That was the go ahead score for us. This was one of those games that could go either way.”

Selma still had a chance, getting the ball two more times in the final minutes. Both drives ended in Moorer interceptions, including one inside the 20-yard line that tipped off the hands of Cyron Ellis into the hands of Bessemer’s TerDarrius Conwell with 4:12 left to play.

“We counteracted everything that happened and made up for with it with big plays also,” Miles said. “They just made one more big play than we did.”

The loss really impacts Selma’s hopes of making the playoffs for the second consecutive season. The Saints came into Friday in a three-way tie for third in Class 6A, Region 4 with the Tigers and Northridge.  The Panthers were off this week but play Bessemer City next week.

At 2-3 in region play, Selma is now in fifth in the region and no longer controls its own playoff destiny. Selma will play at Northridge in two weeks in their final region game.

“We are playing to get in on the next one,” Miles said. “The good thing is we have two weeks to prepare for it.”

The Saints honored the 1986 team that went 8-2 Friday during halftime. At that point, the game was tied 8-8 after Selma had answered Marshall’s first touchdown with a Moorer touchdown pass to Lekedrich Rogers. Bessemer took a 14-8 lead on a 51-yard run by Marshall with 7:06 left in the third quarter. Selma quickly answered on a 3-yard run by Kendarious Merchant with 38.4 seconds to play in the third quarter.

Reeves, who also intercepted two passes, made the extra point and Selma led 15-14.