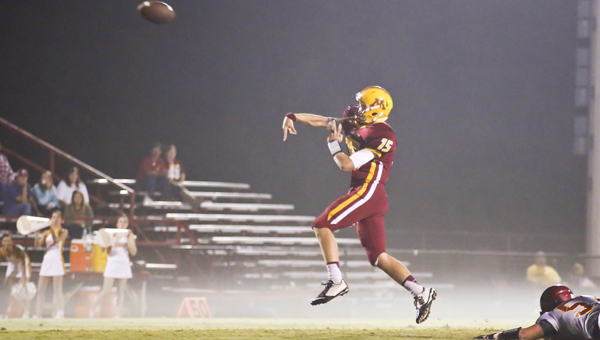 Homecoming for Morgan Academy was a shutout, but not in the way the Senators would have hoped. Morgan (0-7) was shutout 51-0 Friday night with no answer for No. 3 Escambia Academy.

Turnovers and missed tackles were to blame for Morgan’s disappointing loss.

“We didn’t do a good job tackling, we missed several tackles,” said Morgan Academy head coach Jake Wingo. “It was a mixture of both. They had some great players and we did a poor job of tackling.”

Escambia started the game off with a kickoff return by Kris Brown for a touchdown, putting them up 6-0 with only 19 seconds off of the clock.

Morgan would get the ball for their first drive, but Harrison Adams was picked off by Escambia’s Scott Brantley.

The Cougars would capitalize on the interception, with Brown scoring again to double the score.

Gordon Brooks would punch in two more scores for the Cougars, bringing the score to 26-0 with 4:51 still left in the first.

Brett Gorum ran the ball in 5-yards into the end zone for another Cougar touchdown bringing the score to 32-0.

“We knew it was their homecoming, and they’ve played a lot of games on the road, so we felt like we had to get off to a good start, and the first quarter went about as good as we could ask for it to go for us,” said Escambia’s head coach Hugh Fountain.

Escambia would head into the second quarter in control of the ball, with Gordon Brooks scoring on the drive to make it 39-0.

Late in the second quarter, Gary Campbell would catch a pass and run the ball in, bringing the score to 45-0, where it would stay until the fourth.

“They made mistakes and we capitalized,” Fountain said.

Morgan got the ball moving in the first half, but couldn’t come out with points on the board.

“I thought we moved the ball pretty effectively, but we just could not capitalize in the red zone, and couldn’t punch it in the end zone,” Wingo said.

With 2:34 left in the game, Fred Flavors would score for the Cougars, bringing the game to the final score of 51-0.

“Offensively they gave us a great rush. They were only bringing three or four at a time, but they were getting pressure on the quarterback. We missed a couple passes here and there. We just couldn’t convert in the red zone,” Wingo said.

Looking forward, Wingo said his team needs to work on the fundamentals and get better at tackling before hitting the road next week to face Fort Dale.

“[We need to work on] getting our team better, focusing on ourselves, focusing on Morgan, building our program to where it needs to be,” Wingo said.