Maplesville scores on every possession in rout 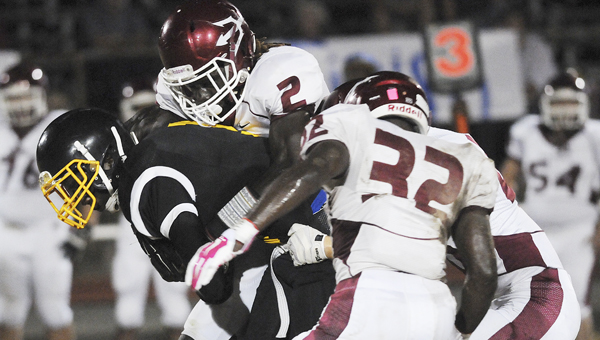 Ellwood Christian’s Jalen Furlow is wrapped up by Maplesville’s Stevonta Bradley and Corey Hall during the first half of Thursday night’s game at Memorial Stadium. Below, Eagles quarterback Marqueith Gullet looks for an open receiver. Maplesville, ranked No. 2 in Class 1A, won the game 69-16. –Daniel Evans

Ellwood Christian had no answer for Maplesville Thursday night at Memorial Stadium, as the Red Devils scored on every offensive possession on their way to a 69-16 win.

No. 2-ranked Maplesville (6-0) led 14-0 before touching the ball on offense for the first time, thanks to a 95 yard kickoff return by Terence Dunlap and a 73-yard interception return by Anthony Moore. From there, the rout was on.

Ellwood Christian head coach Eric Martinear, in his first season at the school, got his first live look at the Red Devils. One day, he’d like to turn the Eagles’ program into the powerhouse Maplesville has become.

“That’s a program you try to model yourself as,” Ellwood Christian head coach Eric Martinear said. “When you look at their program, that’s what you want to [be].”

Friday night showed the Eagles (3-4) they have a long way to go.

Ellwood Christian’s offense struggled all night to move the ball, with the Red Devils’ starting defense not relinquishing any points. It didn’t help that the Eagles were forced to play five different quarterbacks due to injuries.

Regular starter Jalen Furlow began the game at wide receiver and Marqueith Gullet started at quarterback, as Martinear hoped to find a spark offensively against a Red Devils team that had pitched four shutouts this season.

Furlow caught a pass on the first possession and even stepped in at quarterback for a few plays before leaving the game in the second quarter with a knee injury and not returning.

Gullet also left the game with an injury only to return later. Once he returned, he played wide receiver.

Taylor Ellis, J’miere Solomon and Macio Johnson also played quarterback for the Eagles, but none of them could provide a spark for the offense.

“We never envisioned playing five guys at quarterback but when you don’t have much depth things like that happen over the course of a ballgame,” Martinear said.

Ellwood was also without three or four seniors, who Martinear sat because of off the field issues.

Without the injuries and with plenty of playmakers at its disposal, the Maplesville offense had no such problems.

The Red Devils racked up 440 yards of total offense, with 330 of those coming on the ground. When Maplesville quarterback Nicholas Spencer was asked to throw the football, he was perfect going 4-for-4 for 107 yards and two touchdowns.

“I thought the kids did a great job of doing what we set out to do and they executed,” Maplesville head coach Brent Hubbert said. “They executed and didn’t have a bunch of penalties. I said let’s come out and try to on every possession and they did that.”

After the Red Devils’ two early touchdowns, Ellwood caught a break. Maplesville’s Trevor Wallace was returning an Eagles’ punt when Jalen Furlow appeared to just take the ball away from him and ran 40-yards for a score. Furlow also caught the two-point conversion, making it 14-8 Maplesville with 7:32 left in the first quarter.

Unfortunately for Ellwood, Maplesville would score the next seven touchdowns.

Spencer threw a 41-yard touchdown pass to Troy Harrison with 5:56 remaining in the opening quarter.

The Red Devils put it back on the ground for their next score as Terence Dunlap juked his way into the end zone for a 28-yard touchdown to make the score 28-8.

The first score of the second quarter came on a 32-yard pass from Spencer to Troy Harrison. Maplesville tacked on two more touchdowns before the half on a 3-yard run by Jerry Nix III and a 4-yard run by Corey Hall to make it 49-8 at the break.

The third and fourth quarters were reduced to six minutes apiece, but even that couldn’t keep Maplesville off the scoreboard.

Trevor Wallace scored on a 28-yard touchdown and Spencer ran a Gullet pass back 55-yards for a score.

Ellwood finally scored again as Gullet caught a 76-yard touchdown pass to make it 62-16 Red Devils. Maplesville added one more score on a 6-yard run by Nathaniel Watson with 1:05 left to play.

Thursday’s game marked the third straight in which the Eagles gave up 56 points or more. In Ellwood’s last two home games, the Eagles have given up over 61 points.

“We just have to refocus and go back to the basics,” Martinear said. “We have to continue to do the things that it takes to be successful.”

Ellwood Christian plays at American Christian Academy next week in a non-region game. Maplesville will play at A.L. Johnson in a key Class 1A, Region 4 contest.