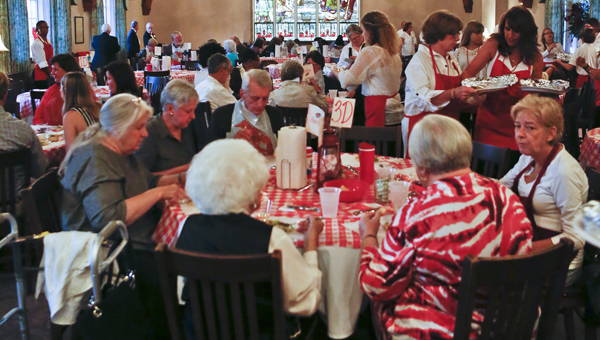 St. Paul’s Lobsterfest sold a record of 515 tickets this year, bringing back some that have enjoyed the lobster for years and treating new guests to a special treat.

The Lobsterfest is a fundraising event put on at St. Paul’s Episcopal Church every year to help raise money for their Little Friends Preschool, along with a few other outreach programs that they contribute to each year.

“It’s just the best lobster you’re ever going to eat,” said Barbara Leet, one of the co-organizers for the event.

The lobsters are caught in either Maine or Canada and flown down south where a worker from Mainely Lobster picks them up and transports them where they need to go.

Once they arrived to the church, Blake Harrison, an employee for Mainely Lobster began the cooking process. With a lot to live up to, Harrison knew had to cook the perfect lobster.

“All we do to cook them is get the water boiling a couple of minutes. Then you put the lobsters in. They boil eight minutes at a hard boil, you uncover them and let them boil about two more minutes. Then they’re ready to be eaten,” Harrison said.

Harrison said he has been cooking for the Lobsterfest for about six or seven years.

“This is a nice place,” Harrison said. “Everybody is real nice and real helpful, and it just seems like a good community … It’s a good event for charity.”

In it’s 12th year, the Lobsterfest continues to be a big success.

It takes a lot of people to put on such a big event and make it successful.

“It takes everyone,” Leet said. “Everybody works together, it couldn’t happen without everybody.”

Nancy Travis, a co-organizer for the event, agreed and said they are very thankful for everyone’s help throughout the process.

“We started back in August calling the chairmen from last year,” Travis said.

They have chairmen set up for individual tasks like pie, butter, bread, salad, wine, takeout and more.

“We’ve got it down to a pretty good science now,” Leet said. “We’ve got 175 takeout this year, which is larger than last year, so that helps us tremendously.”

With the takeout, lobster enthusiast are able to drive up to the curb where someone will take their ticket and hand them their lobster meal, without ever needing to leave their car. Inside, tables were set up for guests to enjoy their dining experience all while being waited on by the youth in the church.

“Everything’s brought to the table like you would have at a fine restaurant,” Leet said.

The tips that are received during the event go to projects the youth have during the year.

“They work very hard, and we’re very proud of them,” Leet said.