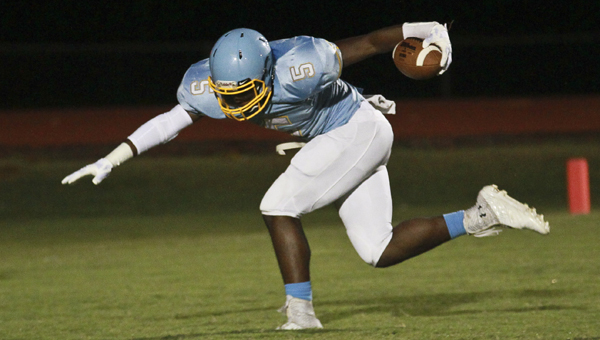 elma running back Brandon Hatcher tries to keep his footing in Friday night’s game against Brookwood Friday night. The Saints will face Bessemer City this week in a key Class 6A, Region 4 game between teams tied for third in the standings.

Selma head coach Leroy Miles knows the importance of Friday night’s game against Bessemer City, a team he knows is better than its record.

The Saints are in a three-way logjam for third in Class 6A, Region 4 with Northridge and Bessemer City, their next two opponents. If Selma wins both, the Saints make things easy and clinch a playoff spot. If the Saints trip up and lose either, they could be left on the outside looking in because of a tiebreaker.

“This is a very big game,” Miles said. “I think it’s the biggest game on the schedule.”

The Selma offense hasn’t skipped a beat without injured quarterback Jesse Boggs, and Miles said that’s a testament to the team’s running game. Brandon Hatcher was moved from linebacker to running back a few weeks ago and has scored seven touchdowns in the last two games as Selma blew out Keith and Brookwood.

“I wanted to try something different and it turned to gold,” Miles said of moving Hatcher to offense.

Miles also credits Marquell Moorer, who has played quarterback for Selma since Boggs’ injury, for not trying to do too much.

“We don’t need Marquell at quarterback to make a lot of big plays for us,” Miles said. “All we need him to do is maintain because we think we are good enough on the line of scrimmage at the offensive and defensive line that we can control the line of scrimmage. We don’t ask Marquel to win games for us. We ask him to manage the game.”

After back to back losses to Hillcrest-Tuscaloosa and McAdory earlier this year, Miles said he had a team meeting, which he thinks helped turned the tide.

“After the loss to McAdory, I had a team meeting and laid the law down what my expectations were from this point,” Miles said. “I told everybody if they didn’t want to be a part of it, they could walk out now.”

It seems to have worked.

Selma won its last two games by a combined score of 92-28.

“We are becoming a family and we are starting to love each other, care about each other and play for each other,” Miles said.”

This is the time of the year when Selma really got things together last year, winning four consecutive games to make the playoffs.

Bessemer City won’t make things easy Friday. Miles has warned his players not to be fooled by the Panthers record.

Bessemer City has lost games to Hueytown, No. 3 Shades Valley, Hillcrest-Tuscaloosa and McAdory.

Still, the path in front of the Saints couldn’t be clearer. If Selma wins its next two games, the Saints will make the playoffs in consecutive seasons for the first time since the 2005 and 2006 seasons.

All of Southside’s goals are still in front of them going into Friday night’s game against UMS Wright. The Panthers have already matched their win total from each of the last two seasons and now have their eyes set on trying to make the postseason. Southside’s final three region games are against Class 4A, Region 1 leading UMS Wright, third place Clarke County and W.S. Neal.

SERIES HISTORY: Southside and UMS Wright have not played in the last 10 years, but Southside won the last meeting in 2003.

WHAT TO WATCH FOR: Southside is looking for its first win this season over a team with a winning record.

Dallas County was three minutes away from its first home win since the opening game of the 2013 season, but watched Central Tuscaloosa rally for a 45-40 win last week.

SERIES HISTORY: Dallas County defeated Wilcox Central 16-14 in the last meeting between the two schools in 2007.

WHAT TO WATCH FOR: Wilcox Central is 0-6 on the season and lost to Calera 60-6 last week, so the Jaguars are hungry. Dallas County, coming off a heartbreaking defeat will look to stay alive in the postseason hunt with a win.

This week Morgan Academy is celebrating homecoming as the Senators finally return to Selma for only their second home game of the year. Escambia is ranked No. 3 in the ASWA poll after a big win last week over Monroe Academy. After Friday, Morgan will have played half of the current AISA top 10.

WHAT TO WATCH FOR: Morgan head coach Jake Wingo said he knows his team will have to slow Escambia’s running game to have a chance Friday. The Cougars are averaging 37.4 points per game this season.

Keith and Akron are trying to salvage seasons that have not gone as planned. Both teams come in winless and the Bears are coming off of a 48-13 defeat to A.L. Johnson last week, while Akron comes in off of an 8-0 defeat to Sunshine.

SERIES HISTORY: Keith has won both of its previous meetings with Akron, including a 14-12 win last year.

WHAT TO WATCH FOR:  Something has to give. Dating back to last season, Keith has lost its last 10 games. The Bears last win was Oct. 18 of last season against Akron. The Rams have lost all six games this year after winning their last two games of last season. One of those losing streaks will end Friday.

After a promising start to the season, Meadowview Christian has dropped three games in a row.  The Trojans will look to get back on track Friday against Tabernacle, who has won two games in a row.

WHAT TO WATCH FOR:  This is Meadowview Christian’s last road game of the season before three home games in a row. The Trojans are 1-3 on the road this season.

Even after back to back losses, Ellwood is still in good position to make the playoffs in Class 1A, Region 4.  The Eagles are currently tied with Sunshine for fourth place in the standings.

WHAT TO WATCH FOR: Ellwood Christian has struggled to get stops defensively the last two weeks. The Eagles gave up 56 points to Verbena and 61 to Linden last week.  Maplesville had scored over 50 points three times this year.

Dallas Co. comes from behind to defeat Maplesville