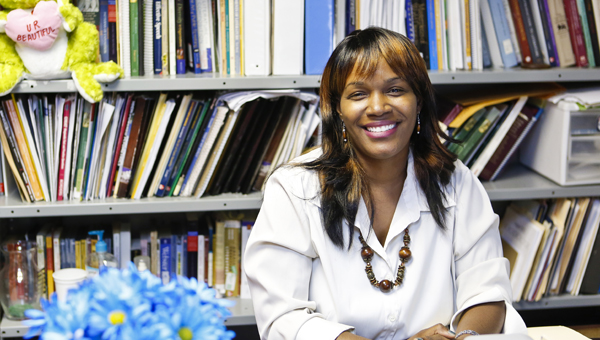 Timeka Ross started Concordia College’s track and field program. She overcame the death of her husband at a young age.

Through pain and adversity, one Concordia professor has been able to push on and become a blessing to others.

Timeka Ross, an assistant professor of English and head track and field coach at Concordia College, has been through a lot in her life, but she didn’t let that stop her from achieving great things.

Ross turned to track and poetry to help her overcome some of the hardest moments she has had to face.

Ross lost her husband at a young age, when he was murdered while visiting family.

“When you’re young, you automatically assume that you’ll be married forever,” Ross said. “I always thought that we were going to be together forever.”

Ross met her husband when they were freshman at Alabama State University, where she was a city girl that fell for the southern gentlemen.

The couple had a 10-month-old son at the time of the murder, and Ross said that she didn’t know how she was going to afford a funeral. Little did she know, Alabama State was going to be a blessing to her family.

“I can remember when that call came saying, we (Alabama State) want to pay for your husband’s funeral,” Ross said. “I’m grateful to this day.”

As a child, Ross and her siblings attended all white schools, and said it was hard to fit in.

“We were the only blacks in the schools,” Ross said. “It was hard being the dark skinned one. We could not come home and complain about it. We just had to be grateful for the opportunities.”

Through her struggles of fitting in and trying to find out where she belonged, Ross started running track and writing poetry. She said she would just write things down because she didn’t want to talk about it.

“Because I was always ostracized, I found track to be my outlet,” Ross said. “I started saying where do I fit in, and that’s where poetry came in.”

Later in life, Ross found herself continuing with the path of track and poetry by teaching and coaching at Concordia. Although at one time track had been put on the back burner, Ross was asked to start the track and field program at the college.

With a lot of praying, Ross decided to accept the position, becoming the first track and field coach at Concordia.

“My athletes have become my family,” Ross said. “My students, they’re the reason that I’m here. My track team is the reason I stay here.”

Desiree Wilson, the 2014 Miss Concordia College Homecoming Queen, takes a moment to pose for a picture before going to... read more