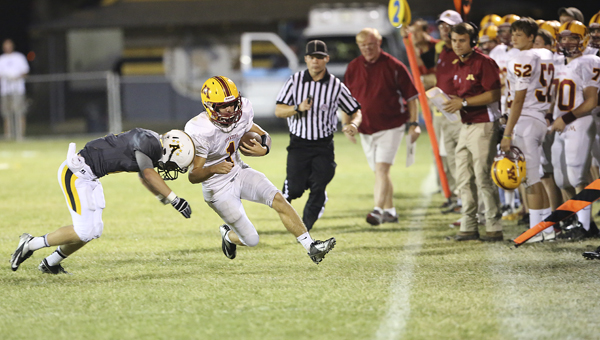 Morgan Academy’s John Ross Bone picks up a first down in Friday night’s 45-14 loss to Autauga Academy. The game was Morgan Academy’s fifth road game in six weeks. Morgan will play at home this week against Escambia Academy, who is 6-0 on the season.–Doug Horton

Although Senators’ fans might find it hard to believe, Morgan Academy will actually play at home this Friday night versus Escambia Academy.

It’s been a rough season thus far for the winless Senators, but the travel and schedule have not helped.

“We’ve been on the road all year it seems like,” Morgan Academy head coach Jake Wingo said. “We’ve played one home game through six games, but the kids are very happy because it’s homecoming. It’s always good to play at home.”

It’s not just the varsity that has been on the road though. The Senators’ junior varsity has also been racking up the miles recently.

“It’s worked out to where all of our junior varsity games have been on the road for the last month,” Wingo said. “Our coaching staff has been stretched, because we’ve been on the road two nights a week. Our players and a lot of our ninth graders are playing varsity too.”

It’s not as if the Senators have been playing bad football teams either.  Morgan’s six varsity opponents this season have a combined record of 28-9 and this week’s opponent — 6-0 Escambia Academy — will only add to the strength of schedule.

Wingo knows the schedule has been tough — arguably as tough as any in the state — but he said his team has handled it well.

“Our guys have really handled it well,” Wingo said. “Their spirits have stayed high and they’ve come in with a positive attitude.”

This week the school is celebrating homecoming.

Wingo, like most coaches, isn’t a huge fan of homecoming week because of all of the distractions, but he thinks it may be a good thing for his team this year.

“Typically, I don’t like homecoming week because there’s all these distractions and activities going on during the week but I’m hoping it is going to lift their spirits,” Wingo said. “We are going to have the home crowd here and have some alumni back, so I think it can only help us this year.”

Morgan finishes its season with three of its final four games at home.

After three weeks of trying to attend, I finally had the honor to attend Selma High School’s Training Table last... read more