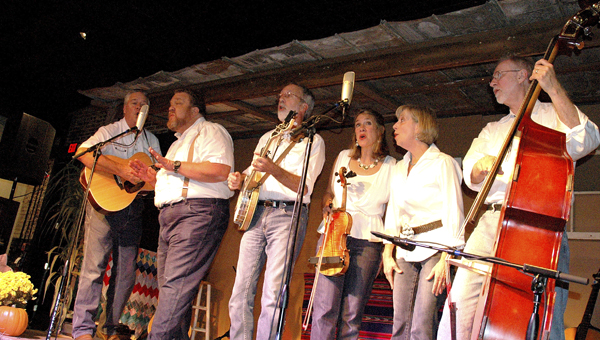 The popular music and comedy troupe The Dill Pickers will return to Selma’s Tale Tellin’ Festival this weekend.

The Dill Pickers, a popular music and comedy troupe from Birmingham, will return to Selma for this weekend’s Alabama Tale Tellin’ Festival.

The stop will be one of the group’s last two performances for 2014 as their “Farewell for Now Tour” continues.

The Pickers started in 1999 as cast members of Birmingham’s first production of the off-Broadway musical “Smoke On The Mountain.”

Even though most of the cast had performed together in other local shows, Smoke was the first time they worked together as an ensemble.

The first show was such a success the group, without a name, started rehearsing the sequel, “Sanders Family Christmas.”

Both shows were performed several times at different theaters across the Birmingham area.

After several years of performing the Sanders shows, the group felt it was time for something new.

That new challenge came in the form of a musical show written by Norton Dill.

Still without a name, the group started getting invitations to perform music across the state without ever promoting the idea of doing a non-theatrical show.

After trying a long list of possibilities, the group finally chose the name, The Dill Pickers.

Member Norton Dill was the only one who voted “no” on the name. He was overruled and has since gladly accepted the responsibility of getting the credit or blame for the group.

The Dill Pickers were a favorite of Tale Tellin’ founder Kathryn Tucker Windham and have performed at the festival numerous times.

Sponsored by ArtsRevive, the festival runs Oct. 10-11 and opens with the Swappin’ Ground at 4:30 each evening followed by Tale Tellin’ at 6:30.

Advance tickets are available at the Selma and Dallas County Chamber of Commerce, Selma-Dallas County Public Library and Allez-oup on Broad Street.

For more information, call Ann Thomas at (334) 878-2787 or email info@artsrevive.com or visit www.artsrevive.com.

The brick wall alongside Old Live Oak Cemetery has been damaged several times this year. A hole in the wall... read more