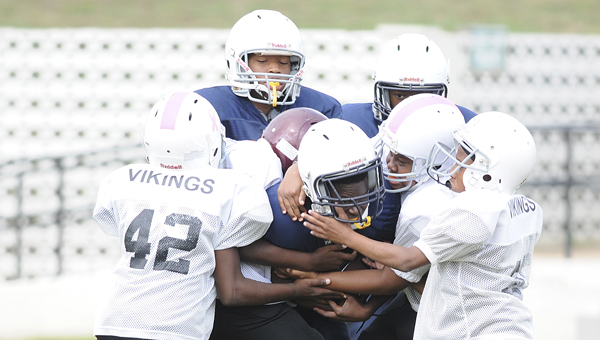 Bears running back Santrez White runs in an Selma youth league Opening Day game against the Vikings. The price and availability of helmets kept as many as 150 kids from playing youth football this fall, according to football director Terry Jackson.

One of the biggest youth football seasons in Selma could have been even bigger, if not for the price of helmets.

More than 600 players signed up to participate in the Selma Parks & Recreation Department’s youth football league, but because of the inability to get helmets — whether because of price or being unable to find one — the league only has around 450 players.

Elton Reece, director of the Selma Parks & Recreation Department, said at times it is hard for players to find a helmet in Selma. The recreation department supplies the game jerseys and shoulder pads, but parents are responsible for finding their youth a helmet and game pants.

Jackson said parents and players often come in and say they couldn’t find a helmet in town and that Prattville and Montgomery are too far away.

Adney Taylor, owner of Taylor Sports and Souvenirs, said he has not had a shortage of helmets this year. Any sizes he is out of stock on, he said he can usually order them and have within a few days.

“To me it hasn’t been a problem,” Taylor said. “Most years we will have anywhere from 60 to 100 helmets in stock. Some people go out of town to buy them, but I think most people we have been able to meet the demand and still have several helmets still here in stock.”

Taylor said he has sold between 60 and 80 youth helmets this year.

Reece said he and Jackson are always working with local retailers to try to find helmets for youth that have been unable to find one.

Once youth do purchase helmets, it’s tough for them to keep up with them. Reece said every year they see instances where a youth helmet gets stolen.

“The main problem we have is the young kids ­­— their parents will go out and buy them a helmet that costs $90 to $100,” Reece said. “Those kids are not used to keeping up with a helmet. They put them down to go to the bathroom or go get water and when they come back, it’ll be gone.”

A player must have a helmet in order to be given shoulder pads or their game jersey, Reece said. Cleats are not required as long as players wear some type of athletic shoes.

Jackson said if all 600 players had ended up playing this year, the recreation department would have probably had to start its games earlier on Saturdays and play more games on Wednesdays. The league would have had around 28 teams under that scenario.

The recreation department is currently only scheduled to play on one Wednesday this year. Games on Saturday start at 9 a.m. each week.

The popular music and comedy troupe The Dill Pickers will return to Selma’s Tale Tellin’ Festival this weekend. The Dill... read more